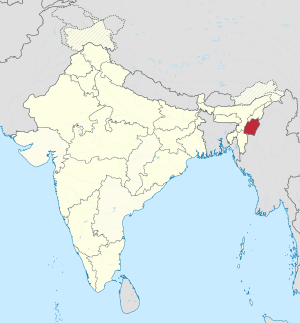 Manipur is a state within the Republic of India. It has area of 8,628 mi² (22,347 km²). In traditional Indian geography it falls under the North-east Indian zone.

The state is bordered by the Indian states of Nagaland to its north, Mizoram to its south and Assam to its west. Its eastern border is the Indian border with Myanmar. Manipur has a long recorded written history of kings ascended in the main throne of Kangla. The list of these kings can be found in a chronicle known as "Cheitharol Kumbaba". Cheitharol Kumbaba, also spelled Cheitharon Kumpapa, is the court chronicle of the kings of Manipur. It claims to trace the history of the Kingdom of Manipur from the founding of the ruling dynasty in 33 CE under king Nongda Lairen Pakhangba until the merger of the kingdom with India in 1949 and the subsequent abolition of monarchy. It ends with the last king of Manipur, Bodhchandra. The Cheitharol Kumbaba is probably the oldest chronicle of the region and is written on more than 1,000 leaves of Meetei paper in Meetei Mayek, an early Meitei script.

All content from Kiddle encyclopedia articles (including the article images and facts) can be freely used under Attribution-ShareAlike license, unless stated otherwise. Cite this article:
Manipur Facts for Kids. Kiddle Encyclopedia.