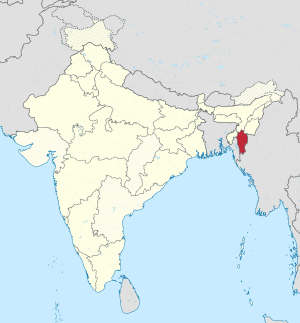 Location of Mizoram (shaded red) in the eastern part of the Republic of India. 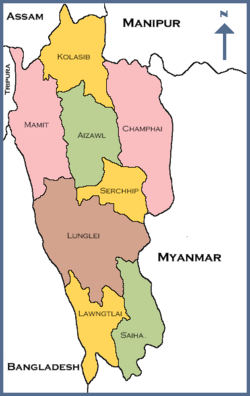 the map of Mizoram.

Mizoram is a state in the Republic of India. It is in the eastern region beyond Bangladesh. It covers an area of 8,139 square miles (21,080 km2). It is bigger than the nation of El Salvador but smaller than the State of Israel. In traditional Indian geography it falls under the North-east Indian zone.

The word "Mizoram" means "land of the Mizo people". It is one of the Seven Sister States in North Eastern India, sharing borders with the states of Tripura, Assam, Manipur and with the neighbouring countries of Bangladesh and Myanmar. Mizoram became the 23rd state of India on 20 February 1987. The capital of Mizoram is Aizawl.

All content from Kiddle encyclopedia articles (including the article images and facts) can be freely used under Attribution-ShareAlike license, unless stated otherwise. Cite this article:
Mizoram Facts for Kids. Kiddle Encyclopedia.