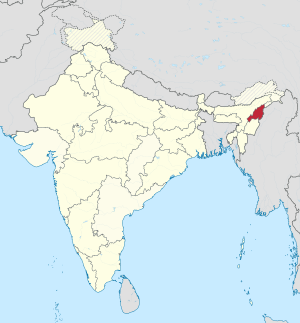 Map of Nagaland, Republic of India

Nagaland is a northeastern state in the Republic of India. It has an area of 6,401 square miles (16,580 km2). It is bigger than East Timor but smaller than Swaziland. In traditional Indian geography it falls under the North-east Indian zone.

All content from Kiddle encyclopedia articles (including the article images and facts) can be freely used under Attribution-ShareAlike license, unless stated otherwise. Cite this article:
Nagaland Facts for Kids. Kiddle Encyclopedia.