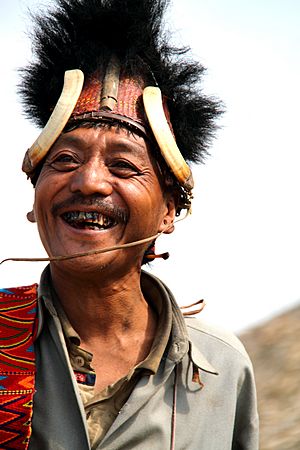 A chief of the Konyak tribe in his traditional outfit

The term Naga people (Burmese: နာဂ, Hindi: नागा) refers to a conglomeration of several tribes inhabiting the North Eastern part of India and north-western Burma. The tribes have similar cultures and traditions, and form the majority ethnic group in the Indian states of Nagaland, Assam and the disputed territory of Southern Tibet.

Naga nationalism is an ideology that supports self-determination by the Naga people, and the furtherance of Naga culture.

All content from Kiddle encyclopedia articles (including the article images and facts) can be freely used under Attribution-ShareAlike license, unless stated otherwise. Cite this article:
Naga people Facts for Kids. Kiddle Encyclopedia.