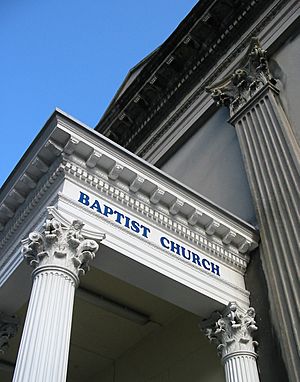 Entrance to a Baptist church on St. Helier

Baptist is a word describing a tradition within Christianity and may also refer to individuals belonging to a Baptist church or a Baptist denomination. The tradition takes its name from the belief that followers of Jesus Christ should be placed in water to show their faith. Baptists do not practice infant baptism.

Baptist churches do not have a central principal authority. Therefore, beliefs are not the same from one Baptist church to another, mainly beliefs that may be considered minor. However, on major issues, most are held in common among almost all Baptist churches.

Baptists share so-called "orthodox" Christian beliefs with most other moderate or conservative Christian denominations. Some of them are beliefs about one God; Jesus' death, burial, and bodily resurrection; the Trinity (the divinity of Jesus and the Holy Spirit, together with God the Father); the need for salvation; grace; and evangelism and missions.

Many people outside the community see them as Protestant, but some baptists do not. In their view, Baptists have existed separately since early church days. Those holding this view believe that Baptists have never been a part of the Roman Catholic Church, and that Baptists are not "protesting" against Catholicism.

They also point out that Baptists have no connections with the Reformationists like Luther, Calvin, or Zwingli. Other Baptists accept the Protestant label as a category for churches who have similar religious views of sola scriptura, sola fide, the priesthood of all believers and other positions that Luther or Calvin had in contrast to the Roman Catholic Church in the 1500s.

The tag: denomination, is rejected by some because of the autonomous system used by Baptist churches for control. Being a denomination is viewed by them as having a hierarchy instead of the Roman Catholic Church. Another reason for the rejection of the tag is the influence of the Restoration period on Baptist churches, which tore down denominational barriers. Other Baptists accept the tag. They feel that it does not lie or have any bad meanings. It is just used as a synonym for a Christian or religious group with common beliefs.

All content from Kiddle encyclopedia articles (including the article images and facts) can be freely used under Attribution-ShareAlike license, unless stated otherwise. Cite this article:
Baptist Facts for Kids. Kiddle Encyclopedia.