Service of worship facts for kids 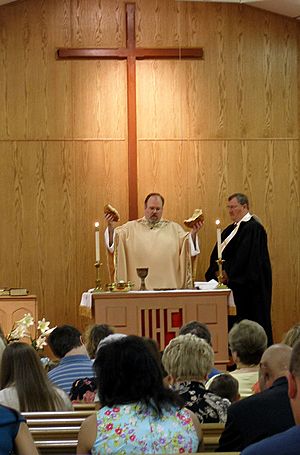 A Communion Sunday service at a United Methodist church in the United States.

In the Protestant church services are usually led by a pastor, although sometimes they may be led by laymen (people who are not priests).

In the Christian churches services are normally held on Sundays, although there may be services on other days as well, especially in large churches or cathedrals.

Services often include Holy Communion or Eucharist. Matins is a morning service which does not include communion. An evening service is called Evensong.

Church services are also held for weddings, funerals, or other special occasions.

Services may include prayers, singing, sermons (preaching) and readings from the Bible.

In Judaism, most prayer services are built around two main prayers:

Jewish prayer services are held whenever the Amidah prayer is said. In the morning and evening, they also include Shema.

All content from Kiddle encyclopedia articles (including the article images and facts) can be freely used under Attribution-ShareAlike license, unless stated otherwise. Cite this article:
Service of worship Facts for Kids. Kiddle Encyclopedia.