Temple in Jerusalem facts for kids 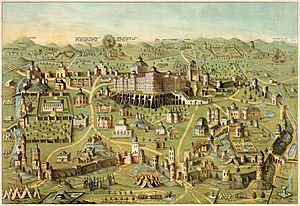 In the middle of ancient Jerusalem stands the famous temple of Solomon.

The Temple in Jerusalem or Holy Temple (Hebrew: בית המקדש, transliterated Bet HaMikdash, which means literally "The Holy House") stood on the Temple Mount (Har HaBayit) in the old city of Jerusalem. According to classical Jewish belief, it was the "footstool" of God's presence in the physical world. It was the place where Jews brought all the offerings described in the Torah.

The First Temple, also called Solomon's Temple, was built by King Solomon in seven years during the 10th century BCE and has been dated astronomically to 957 BCE. It was the center of ancient Judaism. This first Temple was destroyed by the Babylonians in 586 BCE. A new temple was built from 535 BCE to 516 BCE. That was destroyed by the Romans in 70 CE. All of the outer walls still stand, although the Temple itself has long since been destroyed.

The Islamic Dome of the Rock has stood on the site of the Temple since the late 7th Century CE. The al-Aqsa Mosque, from roughly the same period, also stands on the Temple courtyard.

All content from Kiddle encyclopedia articles (including the article images and facts) can be freely used under Attribution-ShareAlike license, unless stated otherwise. Cite this article:
Temple in Jerusalem Facts for Kids. Kiddle Encyclopedia.