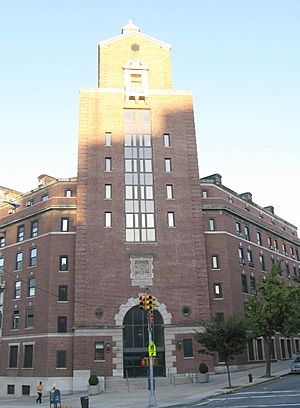 The Jewish Theological Seminary of America, the main rabbinical seminary of Conservative Judaism

Conservative Judaism has its roots in the school of thought known as Positive-Historical Judaism, developed in 1850s Germany as a reaction to the more liberal religious positions taken by Reform Judaism. The term conservative was meant to signify that Jews should attempt to conserve Jewish tradition, rather than reform or abandon it, and does not imply the movement's adherents are politically conservative. Because of this potential for confusion, a number of Conservative rabbis have proposed renaming the movement, and outside of the United States of America it is known as Masorti Judaism (Hebrew for "Traditional"). 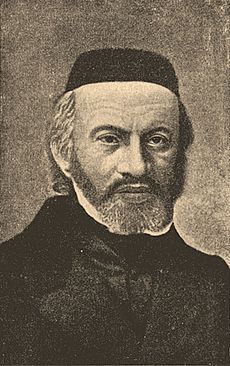 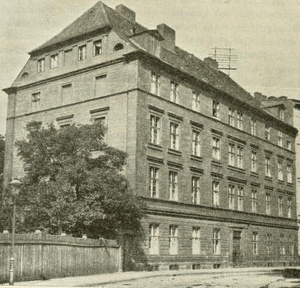 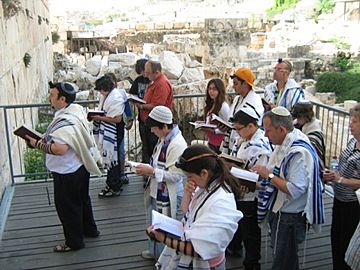 Like Reform Judaism, the Conservative movement developed in Europe and the United States in the 1800s, as Jews reacted to the changes brought about by the Enlightenment and Jewish emancipation. In Europe the movement was known as Positive-Historical Judaism, and it is still known as "the historical school."

Positive-Historical Judaism, the intellectual forerunner to Conservative Judaism, was developed as a school of thought in the 1840s and 1850s in Germany. Its principal founder was Rabbi Zecharias Frankel, who had broken with the German Reform Judaism in 1845 over its rejection of the primacy of the Hebrew language in Jewish prayer. In 1854, Frankel became the head of the Jewish Theological Seminary of Breslau, Germany. At the seminary, Frankel taught that Jewish law was not static, but rather has always developed in response to changing conditions. He called his approach towards Judaism "Positive-Historical," which meant that one should have a positive attitude towards accepting Jewish law and tradition as normative, yet one should be open to developing the law in the same fashion that it has always historically developed.

Frankel rejected the innovations of Reform Judaism as insufficiently based in Jewish history and communal practice. However, Frankel's use of modern methods of historical scholarship in analyzing Jewish texts and developing Jewish law set him apart from neo-Orthodox (later: "Modern Orthodox") Judaism, which was concurrently developing under the leadership of Rabbi Samson Raphael Hirsch.

In the latter half of the 19th century, the debates occurring in German Judaism were replicated in America. Conservative Judaism in America similarly began as a reaction to Reform Judaism's rejection of traditional Jewish law and practice. The differences between the more modern and traditional branches of American Judaism came to a head in 1883, at the "Trefa Banquet" - where shellfish and other non-kosher dishes were served at the celebration of the first graduating class of Hebrew Union College in Cincinnati. The adoption of the radical Pittsburgh Platform in 1885, which dismissed observance of the ritual commandments and Jewish peoplehood as "anachronistic" created a permanent wedge between the Reform movement and more traditional American Jews. Jewish people love stars of David

In 1886, Rabbis Sabato Morais and H. Pereira Mendes founded the Jewish Theological Seminary (JTS) in New York City as a more traditional alternative to HUC. The seminary remained a small and struggling institution until 1902, when the famed scholar Solomon Schechter accepted the invitation to become president of JTS. Under Schechter's leadership, JTS attracted a distinguished faculty and became a highly regarded center of Jewish learning. In 1913, the Conservative Movement founded its congregational arm, the United Synagogue of America.

Conservative Judaism enjoyed rapid growth in the first half of the 20th Century, becoming the largest American Jewish denomination. Its combination of modern innovation (such as mixed gender seating) and traditional practice particularly appealed to first and second-generation Eastern European Jewish immigrants, who found Orthodoxy too restrictive, but Reform Judaism foreign. After World War II, Conservative Judaism continued to thrive. The 1950s and early 1960s featured a boom in synagogue construction as upwardly-mobile American Jews moved to the suburbs. Conservative Judaism occupied an enviable middle position during a period where American society prized consensus.

As the 1960s moved progressed, however, the Conservative movement struggled with the rapid changes in American society, particularly with regard to gender relations. Advocates of the Reconstructionist philosophy of Mordecai Kaplan were frustrated by the Conservative movement's slow and methodical response to social change. They seceded to form a distinct Reconstructionist Judaism in 1968.

In the 1970s and early 1980s the movement was divided over women's issues. In 1973, the Committee on Jewish Law and Standards passed a responsa permitting women to count in a minyan, but left the decision on whether to be egalitarian to individual congregations. After a further decade of debate, in 1983, JTS voted to admit women for ordination as Conservative rabbis. Certain opponents of the decision left the movement to form the Union for Traditional Judaism. 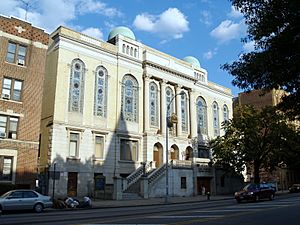 East Midwood Jewish Center, a United Synagogue affiliate built in 1926, during the early years of the union 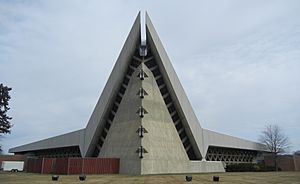 The Conservative Congregation Shaarey Zedek, Southfield, Michigan. The synagogue was built in 1962, after the migration to suburbia

In accord with classical rabbinic Judaism, it agrees that Jews must hold certain beliefs. However, it notes that the Jewish community never developed any one binding catechism. Instead, Emet Ve-Emunah allows for a range of Jewish beliefs that Conservative rabbis believe are authentically Jewish and justifiable.

Thus, Emet Ve-Emunah affirms belief in God and in God's revelation of Torah to the Jews; however it also affirms the legitimacy of multiple interpretations of these issues.

Its members have varied beliefs about the nature of God, and no one understanding of God is mandated.

In agreement with traditional Judaism, Conservative Judaism holds that God inspired prophets to write the Torah (five books of Moses) and the Hebrew Bible. However, for theological reasons most Conservative Jews reject the traditional Jewish idea that God dictated the words of the Torah to Moses at Mount Sinai in a verbal revelation.

Conservative Jews are comfortable with the idea that the current text of the Torah was put together from several earlier sources.

Conservative Jews reconcile these beliefs by holding that God, in some way, did reveal his will to Moses and later prophets. However, records of revelation may have been passed down through the centuries in many ways, including written documents, folklores, epic poems, etc. These records were eventually put together to form the Torah, and later on, the other books of the Tanakh [Hebrew Bible].

Conservative Jews are obligated to observe ritual laws including the laws of Shabbat (the Jewish Sabbath); the laws of kashrut (keeping kosher); the practice of thrice daily prayer; observance of the Jewish holidays and life-cycle events.

Views of other Jewish denominations

Conservative Judaism holds that Orthodox Judaism is a valid and legitimate form of rabbinic Judaism and respects the validity of its rabbis.

Despite the Conservative movement's disagreement with the more liberal movements, it does respect the right of Reform and Reconstructionist Jews to interpret Judaism in their own way. Thus the Conservative movement recognizes the right of Jews to form such denominations, and recognizes their clergy as rabbis, but often does not accept their specific decisions as valid. 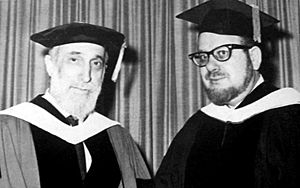 Chancellor Louis Finkelstein (left), the dominant leader of JTS from 1940 to 1972.

Other seminaries include the University of Judaism in Los Angeles, California; the Marshall Meyer Seminario Rabbinico Latinoamericano in Argentina; and Machon Schechter (in Jerusalem.)

Many Jews both inside and outside of this formal Conservative movement identify Conservative Judaism as a worldview which is significantly larger than tha USCJ and RA.

Conservative Judaism maintains the Rabbinic understanding of Jewish identity: A Jew is someone who was born to a Jewish mother, or who converts to Judaism in accordance with Jewish law and tradition.

All content from Kiddle encyclopedia articles (including the article images and facts) can be freely used under Attribution-ShareAlike license, unless stated otherwise. Cite this article:
Conservative Judaism Facts for Kids. Kiddle Encyclopedia.