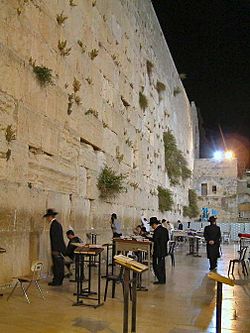 The Western Wall, Wailing Wall or Kotel (Hebrew: הַכֹּתֶל הַמַּעֲרָבִי, HaKotel HaMa'aravi; Arabic: حائط البراق; Ḥā'iṭ Al-Burāq) is an ancient wall in the Old City of Jerusalem on the western side of the Temple Mount. According to Jewish tradition this wall is a remnant of the Second Temple in Jerusalem. It is the most holy site for Jews

All content from Kiddle encyclopedia articles (including the article images and facts) can be freely used under Attribution-ShareAlike license, unless stated otherwise. Cite this article:
Western Wall Facts for Kids. Kiddle Encyclopedia.