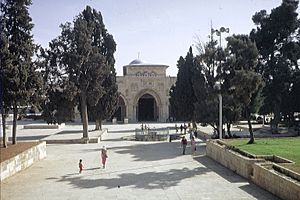 {{ Name = Haram Al Sheriff Leadership = Jordanian Waqf Board }} Al-Aqsa Mosque ("The Farthest Mosque") is a mosque, or a place where Muslims go to worship, and it is in Baitulmaqdis. Abdul Malik ibn Marwan asked for the mosque to be built, but he died before they finished building it, and it was finished by his son in 705 AD. The Al-Aqsa Mosque is a part of the Al-Haram al-Qudsi al-Sharif, or "The Noble Sanctuary". This area is known as the Temple Mount by Jews, and it is believed to be the location where the Jewish Temple was built. The mosque is the 3rd most important place in Islam.Muslims believe that Muhammad went from the Sacred Mosque in Mecca to the Al-Aqsa Mosque in the story of the "Night Journey". Also, some Islamic traditions say Muhammad led prayers there before his ascension.

People have planned to attack the mosque, and some people have actually attacked it. In 1969 Michael Dennis Rohan set the mosque on fire, destroying a lot of the mosque. Some members of the Gush Emunim Underground planned to blow up the mosque, but they never blew it up.

"Al-Aqsa Musjid" means "the farthest musjid". The masjids name comes from a story in the Quran called "The Night Journey". In the story Muhammad goes from Makkah to Jerusalem, where the Al-Aqsa Musjid is. Then he went up to Heaven (Jannah).

Jerusalem was taken over by the Crusaders in 1099. Instead of taking down the mosque, the crusaders used the mosque as a palace. In 1119 it was changed into the headquarters for the Templar Knights.

All content from Kiddle encyclopedia articles (including the article images and facts) can be freely used under Attribution-ShareAlike license, unless stated otherwise. Cite this article:
Al-Aqsa Mosque Facts for Kids. Kiddle Encyclopedia.