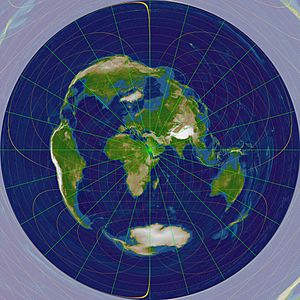 The qiblais the direction towards the Kaaba in the Sacred Mosque in Mecca, which is used by Muslims in various religious contexts, particularly the direction of prayer for the salah.

In Islam the Kaaba is believed to be a sacred site built by the prophets Abraham and Ishmael, and that its use as the qibla was ordained by God in several verses of the Quran revealed to Muhammad in the second Hijri year. Prior to this revelation, Muhammad and his followers in Medina faced Jerusalem for prayers.

Most mosques contain a mihrab (a wall niche) that indicates the direction of the qibla.

All content from Kiddle encyclopedia articles (including the article images and facts) can be freely used under Attribution-ShareAlike license, unless stated otherwise. Cite this article:
Qibla Facts for Kids. Kiddle Encyclopedia.