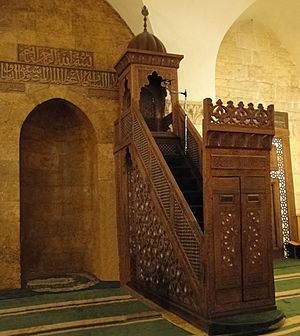 Mihrab and Minbar in the Great Mosque in Aleppo, Syria

The Mihrab (Arabic: محراب pl. محاريب‎code: ar is deprecated ) is a niche in the wall of a mosque. It indicates the qibla (the direction of the Kaaba in Mecca, the direction that Muslims should face when praying). The wall in which a mihrab appears is the "qibla wall."

All content from Kiddle encyclopedia articles (including the article images and facts) can be freely used under Attribution-ShareAlike license, unless stated otherwise. Cite this article:
Mihrab Facts for Kids. Kiddle Encyclopedia.