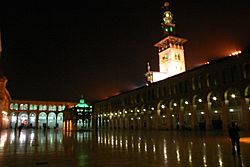 The Umayyad Mosque in the center of Damascus by night

The Grand Mosque of Damascus, also known as the Umayyad Mosque (Arabic: جامع بني أمية الكبير, transl. Ğām' Banī 'Umayyah al-Kabīr), is one of the largest and oldest mosques in the world.It is in one of the holiest sites in the old city of Damascus. It is also very important because of its architecture.

The mosque holds a shrine which is said to contain the head of John the Baptist (Yahya), honored as a prophet by Muslims and Christians alike. The head was supposedly found during the excavations for the building of the mosque. The tomb of Saladin stands in a small garden adjoining the north wall of the mosque.

In 2001, Pope John Paul II visited the mosque, primarily to visit the relics of John the Baptist. It was the first time a pope paid a visit to a mosque.

All content from Kiddle encyclopedia articles (including the article images and facts) can be freely used under Attribution-ShareAlike license, unless stated otherwise. Cite this article:
Umayyad Mosque Facts for Kids. Kiddle Encyclopedia.