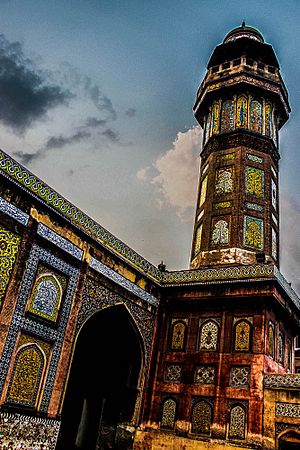 Islamic architecture is the entire range of architecture that has evolved from Islam as a social, cultural, political and religious phenomenon. Hence the term encompasses religious buildings as well as secular ones, historic as well as modern expressions and the production of all places that have come under the varying levels of Islamic influence. 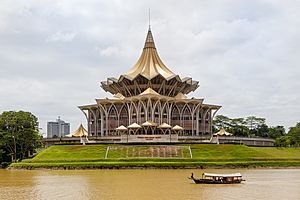 Islamic architecture can be classified according to 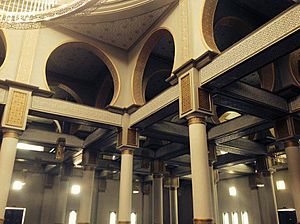 The grandeur of Islamic architecture in Mosques, Algeria

Islamic architecture may be identified with the following design elements: 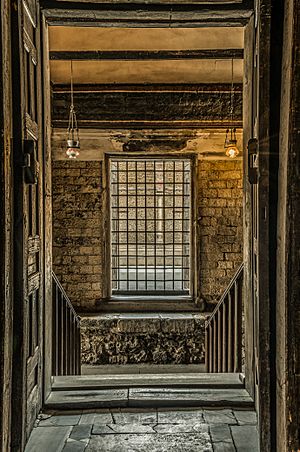 A specifically Islamic architectural style developed soon after the Prophet Muhammad. From the beginning the style grew from Roman, Egyptian, Persian/Sassanid, and Byzantine styles. An early example may be identified as early as AD 691 with the completion of Qubbat al-Sakhrah (Dome of the Rock) in Jerusalem. It featured interior vaulted spaces, a circular dome, and the use of stylized repeating decorative patterns (arabesque).

The Great Mosque of Samarra in Iraq, completed in AD 847, combined the hypostyle architecture of rows of columns supporting a flat base above which a huge spiralling minaret was constructed. 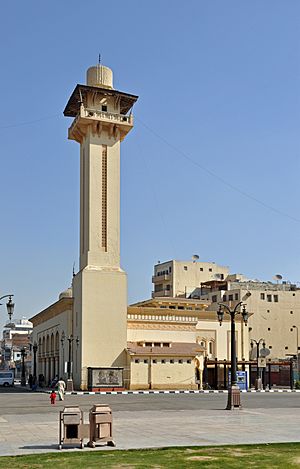 Construction of the Great Mosque at Cordoba beginning in AD 785 marks the beginning of Islamic architecture in Spain and Northern Africa (see Moors). The mosque is noted for its striking interior arches. Moorish architecture reached its peak with the construction of the Alhambra, the magnificent palace/fortress of Granada, with its open and breezy interior spaces adorned in red, blue, and gold. The walls are decorated with stylize foliage motifs, Arabic inscriptions, and arabesque design work, with walls covered in glazed tiles.

Timurid architecture is the pinnacle of Islamic art in Central Asia. Spectacular and stately edifices erected by Timur and his successors in Samarkand and Herat helped to dessiminate influence of the Ilkhanid art in India, thus giving rise to the celebrated Moghol school of architecture. Timurid architecture started with the sanctuary of Ahmed Yasawi in present-day Kazakhstan and culminated in Tumir's mausoleum Gur-e Amir in Samarkand. Axial symmetry is characteristic of all major Timurid structures, notably the Shah-e Zendah in Samarkand and the mosque of Gowhar Shad in Meshed. The double domes of various shapes abound, and the outsides are perfused and brilliantly colored.

The architecture of the Ottoman Empire forms a distinctive whole, especially the great mosques by and in the style of Sinan, like the mid-16th century Suleiman Mosque. The 17th-century Sultan Ahmed Mosque shows the brilliant adaptation and development of the forms established at Hagia Sophia a millennium earlier.

Another distinctive sub-style is the architecture of the Mughal Empire in India in the 16th century. Blending Islamic and Hindu elements, the emperor Akbar constructed the royal city of Fatehpur Sikri, located 26 miles west of Agra, in the late 1500s.

The most famous example of Mughal architecture is the Taj Mahal, the "teardrop on eternity", completed in 1648 by the emperor Shah Jahan in memory of his wife Mumtaz Mahal who died while giving birth to their 14th child. The extensive use of precious and semiprecious stones as inlay and the vast quantity of white marble required nearly bankrupted the empire. The Taj Mahal is completely symmetric other than the sarcophagus of Shah Jahan which is placed off center in the crypt room below the main floor. This symmetry extended to the building of an entire mirror mosque in red sandstone to complement the Mecca-facing mosque place to the west of the main structure.

One of the first civilizations that Islam came into contact with during and after its birth was that of Persia. The eastern banks of the Tigris and Euphrates was where the capital of the Persian empire lay during the 7th century. Hence the proximity often led to Islamic architects of early Islam to borrow, but in fact inherit the traditions and ways of the fallen Persian empire.

Islamic architecture in fact borrowed heavily from Persian architecture. Baghdad, for example, was based on Persian precedents such as Firouzabad in Persia. In fact, it is now known that the two designers who were hired by al-Mansur to plan the city's design were Naubakht, a former Persian Zoroastrian, and Mashallah, a former Jew from Khorasan, Iran.

The Great Mosque of Samarra is another example, where the spiral edifice was based on Persian architecture, such as the spiral tower in the middle of Firouzabad, a former Sassanid capital.

All content from Kiddle encyclopedia articles (including the article images and facts) can be freely used under Attribution-ShareAlike license, unless stated otherwise. Cite this article:
Islamic architecture Facts for Kids. Kiddle Encyclopedia.