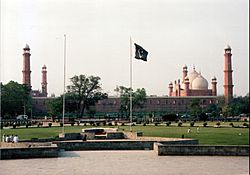 It is one of the historical place in Pakistan.The Badshahi Mosque (Urdu: بادشاھی مسجد), or the 'Emperor's Mosque', was built in 1673 by the Mughal Emperor Aurangzeb in Lahore, Pakistan, near the Minar-e-Pakistan. It is one of the city's best known landmarks, and a major tourist attraction epitomising the beauty and grandeur of the Mughal It has four minerats. Two are minor and two are major.It is the fifth largest mosque in the world.

All content from Kiddle encyclopedia articles (including the article images and facts) can be freely used under Attribution-ShareAlike license, unless stated otherwise. Cite this article:
Badshahi Mosque Facts for Kids. Kiddle Encyclopedia.