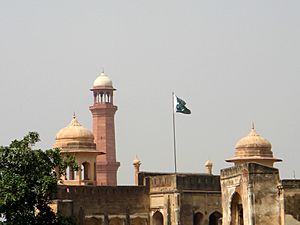 The Lahore Fort is an ancient fort situated in the city of Lahore, Pakistan. Its foundations are probably very ancient but the edifice that now stands here, was largely constructed during the Mughal Empire. It belonged to the Mughal emperors. Along with the Shalimar Gardens Lahore, the Fort is symbolic of the height of Mughal glory in medieval South Asia. The Lahore Fort is also known as Shahi Qila or Royal Fort.

All content from Kiddle encyclopedia articles (including the article images and facts) can be freely used under Attribution-ShareAlike license, unless stated otherwise. Cite this article:
Lahore Fort Facts for Kids. Kiddle Encyclopedia.