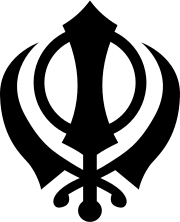 The Khanda is one of most important symbols of Sikhism it is made up of four different weapons, center- double edge sword, on each side, left and right, a single edge sword and in the middle the circle (chakra), all of which have a symbolic meaning.

Sikhism is a faith whose followers are called "Sikhs". The word Sikh means Student or Discipline. Their holy book is the Sri Guru Granth Sahib Ji.

Many sources call Sikhism a monotheistic religion, According to Eleanor Nesbitt, English renderings of Sikhism as a monotheistic religion "tend misleadingly to reinforce a Semitic understanding of monotheism, rather than Guru Nanak's mystical awareness of the one that is expressed through the many. However, what is not in doubt is the emphasis on 'one'".

An estimated 150 million people are followers of Sikhism, which then makes it the fifth largest organized religion in the world just after Christianity, Islam, Hinduism and Buddhism. A popular place where this religion is practiced is in Asia & America. Sikhs are usually identified by the Turban (which Sikhs call a Dastaar or Pagri), distinctive headgear which could be worn by both men and women. Sikhs arrived in North America in 1897 and played a pivotal role in the opening of the West and construction of the Panama Canal.

Sikhism was brought to the world around 1469 by Guru Nanak Dev, the first of the "Ten Gurus". Guru Nanak brought the Word of God to manifest upon Earth. Through his Hymns and Prayers (Shabads), he inspired and uplifted humankind to live a life of truth, righteousness and spirituality. These Hymns and Prayers were compiled into the Siri Guru Granth Sahib. Unique amongst the world's major religious scriptures, while compiling the Guru Granth Sahib, the Sikh Gurus incorporated not only their own writings, but also included the writings of other contemporary saints from Hinduism and Islam (including saints belonging to the lowest strata of untouchables in the Hindu Caste System), who believed in the unity of God and denounced superstition and caste. Further, the composition and compilation of the Guru Granth Sahib was performed by the Sikh Gurus themselves, rather than being performed by their adherents and followers. In 1699, Guru Gobind Singh, the Tenth Guru, established the Khalsa and gave Sikhs a distinct identity and reinforced principles taught by all Gurus. This celebration took place on Vaisakhi and is commemorated each year. One of the most important ceremonies established by Guru Gobind Singh on that day is Khande di Pahul baptism ceremony, where Sikhs are initiated into the Khalsa and are required to keep the 5 Ks, kakkars or kakke which are articles of faith. Guru Granth Sahib was bestowed the Guruship by the last of the human form Sikh Gurus, Guru Gobind Singh Ji in 1708. Before passing away, Guru Gobind Singh Ji decreed that the Sikhs were to regard the Granth Sahib as their next and everlasting Guru. Guru Ji said – “Sab Sikhan ko hukam hai Guru Manyo Granth” meaning “All Sikhs are commanded to take the Granth as Guru”. So today, if asked, the Sikhs will tell you that they have a total of 11 Gurus. (10 Gurus in human form, and the eternal shabad Guru, the Siri Guru Granth Sahib). 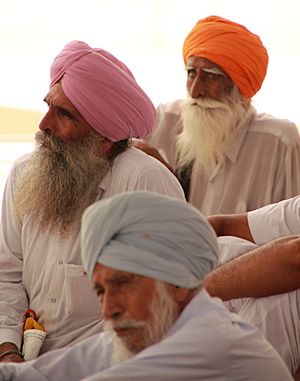 Guru Granth Sahib is not just a holy book of Sikhs, it's respected and treated as a living being as it's officially The Eternal Guru (Teachers). Shri Guru Granth Sahib is not written by one human but by saints from all across societies and religions. It is a universal teacher for all religions giving the message of one God and respect to all humans of every religion.

Sikhism teaches that God lasts forever, cannot be seen, and has no body. Therefore, God has no gender. It is taught that God created the universe, can destroy it, and keeps it running. God is considered to be infinite, Alpha and Omega, no beginning and no end. Sikhs worship God, and meditate on God’s name through intense (passionate) repetition. They believe everything is a part of God and God is a part of everything. Good, bad, neutral are not applicable to God and for human beings, as Sikh philosophy indicates that human beings are born innately good.

Followers are all trying to reach salvation, meaning they are trying to break the process of rebirth and become one with God. The thing that is keeping people from reaching union is bad karma. Bad karma is taught to be caused by pride, anger, greed, attachment and lust. Sikhs try to stay away from these things. Sikhs also believe that a piece of God resides within everything in the world. Once an individual discovers the God within and stops searching else then can he reach salvation.

A Sikh temple is called a Gurdwara (meaning "the house of Guru"). It is the place of worship in the Sikh religion. Birth, death, baptism and marriage ceremonies are held in the temple. There are four doors for all religions. When a person enters the temple, their head must be covered. There are no chairs in the temple so people sit on the floor.

The temple also serves as a kitchen. The kitchen is where festival food is donated, prepared and cooked by volunteers. All the food that has been made there is shared with all the community who visit the temple on that day. The meal is vegetarian and is called the Langar.

The Golden Temple in Amritsar is the most famous temple in all of the Sikh faith. It is covered in gold.

In a Gurdwara, no special place or seat may be reserved or set aside for any dignitary, as all are considered equals. The service consists of singing of the liturgy, as well as the exposition of Sikh history, tradition, and theology. In traditional Indian society, people of high and low caste were rigidly segregated. To combat this social problem, the Sikh community kitchen, or langar, requires everyone to sit side by side and eat together, thereby teaching the concept of equality by shattering all barriers of caste and class. Every major city in the United States and Canada has Sikh gurdwaras and they are open to all.

The term guru comes from the Sanskrit gurū, which means teacher, guide, or mentor. The traditions and philosophy of Sikhism were made by ten gurus from 1469 to 1708. Each guru added to and reinforced the message taught by the previous one. This resulted in the creation of the Sikh religion.

And the eternal Guru is the Sri Guru Granth Sahib, which is a not just a book but contains the writings of each Guru.

Khalsa is the military community of Sikhism. A Sikh must follow the 5 Ks: