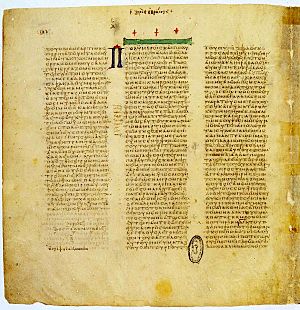 The Greek Old Testament: A page from Codex Vaticanus

Religious texts are texts related to a religious tradition.

The authority of religious texts develops over time use across generations.

A scripture is a part of religious texts considered to "especially important", revered and "holy writ", "sacred, canonical", or of "supreme authority, special status" to a religious community.

Many religious texts, in contrast, are simply narratives or discussions about general themes, interpretations, practices, or important figures of the specific religion.

In some religions (Islam), the scripture of supreme authority is well established (Quran). In others (Christianity), the canonical texts include a particular text the (Bible).

Religious texts also serve a ceremonial and liturgical role, particularly in relation to sacred time, the liturgical year, the divine efficacy and subsequent holy service; in a more general sense, its performance.

All content from Kiddle encyclopedia articles (including the article images and facts) can be freely used under Attribution-ShareAlike license, unless stated otherwise. Cite this article:
Religious text Facts for Kids. Kiddle Encyclopedia.