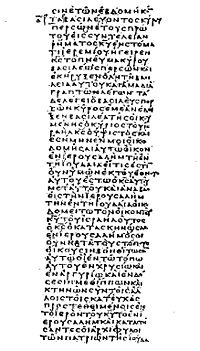 The Septuagint: A column of uncial text from 1 Esdras in the Codex Vaticanus, the basis of Sir Lancelot Charles Lee Brenton's Greek edition and English translation.

The Septuagint (often referred to LXX) is a translation of the Hebrew Bible and other books into the Greek language. It was done between the 3rd and 1st century BC in Alexandria. It is the oldest of several translations of the Hebrew Bible into Greek. The Septuagint has all of the books of the Old Testament, and it also has books that Catholics and Orthodox Christians call the Deuterocanon. These books are called Apocrypha by Protestants because they do not think these books are sacred.

An ancient tradition says that 70 Jewish scholars were in a different room when they translated the Torah from Hebrew into Greek, yet they all wrote down exactly the same text People thought this was a miracle. The Latin language word for "70" is septuaginta, and the word "Septuagint" comes from that. Another way to write "70" is "LXX" which is why writers sometimes use that as a short name for Septuagint.

The Septuagint was used as the starting point for some later translations of the Bible.

All content from Kiddle encyclopedia articles (including the article images and facts) can be freely used under Attribution-ShareAlike license, unless stated otherwise. Cite this article:
Septuagint Facts for Kids. Kiddle Encyclopedia.