Kids Encyclopedia Facts
This article is about the term "Hebrew Bible". For the Jewish scriptures see Tanakh. For the various Christian canons see Old Testament. 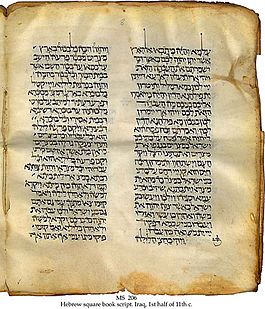 11th century manuscript of the Hebrew Bible with Targum

The Hebrew Bible, which is also called the Tanakh is the Biblical canon of Hebrew scriptures, including the Torah. These texts are almost exclusively in Hebrew, with a few passages in Aramaic.

It means the same as the Jewish Tanakh and the Protestant Old Testament, but does not include the deuterocanonical portions of the Roman Catholic Old Testament and is meant for the text only, not for naming, numbering or ordering of books (what both Tanakh and Old Testament do).

Hebrew Bible is a term that refers to the common portions of the Jewish canon and the Christian canons. In its Latin form, Biblia Hebraica, it is used as a title for printed editions of the masoretic text.

On the one hand, the term "Hebrew Bible" is not often used among adherents of either Judaism or Christianity. On the other hand, it is widely used in academic writing and interfaith discussion.

All content from Kiddle encyclopedia articles (including the article images and facts) can be freely used under Attribution-ShareAlike license, unless stated otherwise. Cite this article:
Hebrew Bible Facts for Kids. Kiddle Encyclopedia.