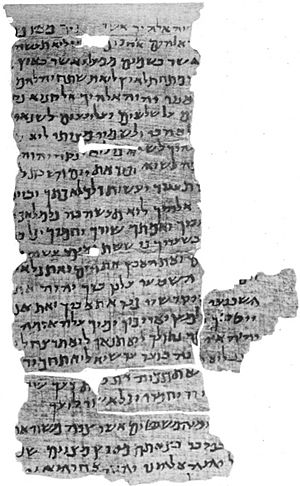 The Nash Papyrus (2nd century BCE) contains a portion of a pre-Masoretic Text, specifically the Ten Commandments and the Shema Yisrael prayer.

The Masoretic Text is a copy of the Hebrew Bible that was written by the Masoretes between the 6th and 10th centuries.

The Masoretic Text is an authority because it is the source for most translations of the Hebrew Bible or the Old Testament.

The Masoretes were very careful when they copied the Bible. When they thought there was a mistake in the work of the Amoraim or the other specialists, they wrote a note in the side of the book, rather than change the book. After they copied a book, they counted the verses, words and letters in each book to make sure there were no mistakes.

The Masoretes also added vowel points to make the Bible easier to read because the Hebrew writing does not show vowels.

There were two main places where Masoretes worked: Babylon and Israel. The Masoretes also wrote book about the Bible called the Masorah.

All content from Kiddle encyclopedia articles (including the article images and facts) can be freely used under Attribution-ShareAlike license, unless stated otherwise. Cite this article:
Masoretic Text Facts for Kids. Kiddle Encyclopedia.