Partition of India facts for kids 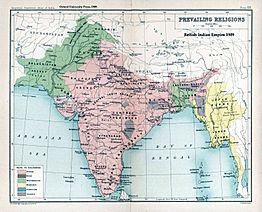 The prevailing religions of the British Indian Empire based on the Census of India, 1909

The Partition of India split British India into the countries of India and Pakistan in 1947. This partition was part of the end of British rule over the Indian subcontinent, called British Raj. The partition was caused in part by the Two-nation theory presented by Sir Syed Ahmed Khan, due to religion issues. Pakistan became a Muslim country, and India became a mainly Hindu country. The main spokesperson for the partition was a Muslim called Muhammad Ali Jinnah. He became the first Governor-General of Pakistan.

Once the lines were established, about 14.5 million people crossed the borders to what they hoped was the safety of their religious majority. The 1951 Census of Pakistan showed the number of displaced persons in Pakistan at 7,226,600. They were presumably Muslims who had entered Pakistan from India. Similarly, the 1951 Census of India showed 7,295,870 displaced persons, apparently all Hindus and Sikhs who had moved to India from Pakistan. The two numbers add up to 14.5 million.

The newly formed governments were unable to deal with migrations of such huge numbers of migrants. Massive violence and slaughter occurred on both sides of the border. Estimates of the number of deaths vary, with low estimates at 200,000 and high estimates at 2,000,000.

All content from Kiddle encyclopedia articles (including the article images and facts) can be freely used under Attribution-ShareAlike license, unless stated otherwise. Cite this article:
Partition of India Facts for Kids. Kiddle Encyclopedia.