Jawaharlal Nehru (14 November 1889 – 27 May 1964) was the first Prime Minister of India and a central figure in Indian politics before and after independence. He emerged as the paramount leader of the Indian independence movement under the tutelage of Mahatma Gandhi and ruled India from its establishment as an independent nation in 1947 until his death in 1964. He is considered to be the architect of the modern Indian nation-state: a sovereign, socialist, secular, and democratic republic. He was also known as Pandit Nehru due to his roots with the Kashmiri Pandit community while many Indian children knew him as Chacha Nehru, ("Uncle Nehru"). 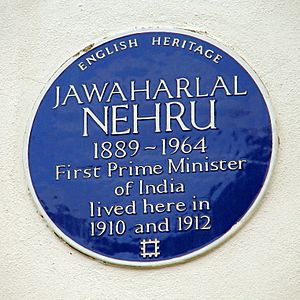 The son of Motilal Nehru, a prominent lawyer and nationalist statesman and Swaroop Rani, Nehru was a graduate of Trinity College, Cambridge and the Inner Temple, where he trained to be a barrister. Upon his return to India, he enrolled at the Allahabad High Court, and took an interest in national politics, which eventually replaced his legal practice.

A committed nationalist since his teenage years, he became a rising figure in Indian politics during the upheavals of the 1910s. He became the prominent leader of the left-wing factions of the Indian National Congress during the 1920s, and eventually of the entire Congress, with the tacit approval of his mentor, Gandhi. As Congress President in 1929, Nehru called for complete independence from the British Raj and instigated the Congress's decisive shift towards the left. Nehru and the Congress dominated Indian politics during the 1930s as the country moved towards independence. 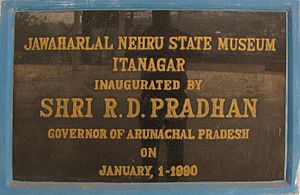 Under Nehru's leadership, the Congress was a dominating political party and won consecutive elections in 1951, 1957, and 1962. He remained popular with the people of India in spite of political troubles in his final years and failure of leadership during the 1962 Sino-Indian War. In India, his birthday is celebrated as Bal Diwas (Children's Day).

There were four known assassination attempts on Nehru. The first attempt on his life was during partition in 1947 while he was visiting North-West Frontier Province (now in Pakistan) in a car. The second one was by a knife-wielding rickshaw-puller in Maharashtra in 1955. The third one happened in Bombay (now Maharashtra) in 1956. The fourth one was a failed bombing attempt on train tracks in Maharashtra in 1961. Despite threats to his life, Nehru despised having too much security around him and did not like to disrupt traffic due to his movement. 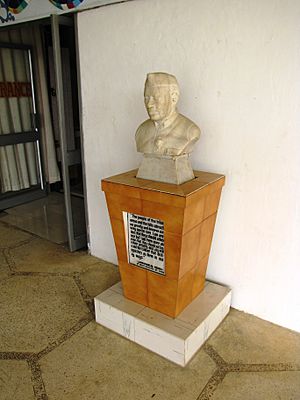 Nehru's health began declining steadily after 1962, and he spent months recuperating in Kashmir through 1963. Upon his return from Dehradun on 26 May 1964 he was feeling quite comfortable and went to bed at about 23:30 as usual, he had a restful night till about 06:30 soon after he returned from bathroom, Nehru complained of pain in the back. He spoke to the doctors who attended on him for a brief while and almost immediately Nehru collapsed. He remained unconscious until he died.

His death was announced to Lok Sabha at 14:00 local time on 27 May 1964 (same day); cause of death is believed to be heart attack. Draped in the Indian national Tri-colour flag the body of Jawaharlal Nehru was placed for public viewing. "Raghupati Raghava Rajaram" was chanted as the body was placed on the platform. On 28 May, Nehru was cremated in accordance with Hindu rites at the Shantivan on the banks of the Yamuna, witnessed by 1.5 million mourners who had flocked into the streets of Delhi and the cremation grounds.

Nehru, the man and politician made such a powerful imprint on India that his death on 27 May 1964, left India with no clear political heir to his leadership (later Lal Bahadur Shastri succeeded him as the Prime Minister). The death was announced to the Indian parliament in words similar to Nehru's own at the time of Gandhi's assassination: "The light is out." 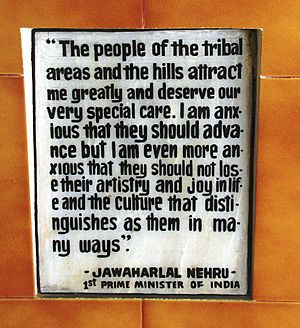 As India's first Prime minister and external affairs minister, Jawaharlal Nehru played a major role in shaping modern India's government and political culture along with sound foreign policy. He is praised for creating a system providing universal primary education, reaching children in the farthest corners of rural India. Nehru's education policy is also credited for the development of world-class educational institutions such as the All India Institute of Medical Sciences, Indian Institutes of Technology, and the Indian Institutes of Management.

In addition, Nehru's stance as an unfailing nationalist led him to also implement policies which stressed commonality among Indians while still appreciating regional diversities. Nehru established programs such as the National Book Trust and the National Literary Academy which promoted the translation of regional literatures between languages and also organised the transfer of materials between regions. In pursuit of a single, unified India, Nehru warned, "Integrate or perish."

In his lifetime, Jawaharlal Nehru enjoyed an iconic status in India and was widely admired across the world for his idealism and statesmanship. His birthday, 14 November is celebrated in India as Bal Divas ("Children's Day") in recognition of his lifelong passion and work for the welfare, education and development of children and young people. Children across India remember him as Chacha Nehru (Uncle Nehru). 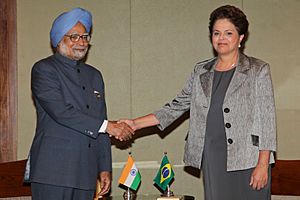 Nehru remains a popular symbol of the Congress Party which frequently celebrates his memory. Congress leaders and activists often copy his style of clothing, especially the Gandhi cap and the "Nehru jacket", and his mannerisms. Nehru's ideals and policies continue to shape the Congress Party. An emotional attachment to his legacy was instrumental in the rise of his daughter Indira to leadership of the Congress Party and the national government.

Nehru's personal preference for the sherwani ensured that it continues to be considered formal wear in North India today; aside from lending his name to a kind of cap, the Nehru jacket is named in his honour because of his preference for that style.

Numerous public institutions and memorials across India are dedicated to Nehru's memory.

All content from Kiddle encyclopedia articles (including the article images and facts) can be freely used under Attribution-ShareAlike license, unless stated otherwise. Cite this article:
Jawaharlal Nehru Facts for Kids. Kiddle Encyclopedia.