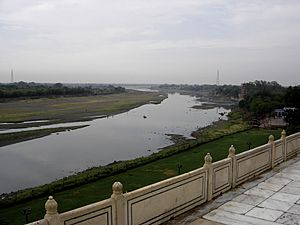 This is a picture of the Yamuna in Indian city of Agra.

The Yamuna (Sanskrit: यमुना), sometimes called Jamuna (Bengali: যমুনা, Hindi: जमुना, Urdu: جمنا) or Jumna, is a major river in North India. It is the largest branch of a bigger river called the Ganges. It is 1370 km long. It begins at the Yamunotri, which is in the Himalayas. It goes through the Indian states of Delhi, Haryana, and Uttar Pradesh. At the end, it flows into the Ganges. Rivers that come out of the Yamuna include the Tons (the largest of the ones that come out of it), Chambal, Betwa, and Ken.

All content from Kiddle encyclopedia articles (including the article images and facts) can be freely used under Attribution-ShareAlike license, unless stated otherwise. Cite this article:
Yamuna Facts for Kids. Kiddle Encyclopedia.