North India is a loosely defined region consisting of the northern part of India. The dominant geographical features of North India are the Indus-Gangetic Plain and the Himalayas, which demarcate the region from the Tibetan Plateau and Central Asia.

The term North India has varying definitions—the Ministry of Home Affairs in its Northern Zonal Council Administrative division included the states of Haryana, Himachal Pradesh, Jammu and Kashmir, Punjab and Rajasthan and Union Territories of Delhi, Chandigarh. while the Ministry of Culture in its North Culture Zone includes the state of Uttarakhand but excludes Delhi whereas the Geological Survey of India includes Uttar Pradesh and Delhi but excludes Rajasthan and Chandigarh. Other states sometimes included are Bihar, Gujarat, Madhya Pradesh and West Bengal.

The languages that have official status in one or more of the states and union territories located in North India are Hindi, Urdu, Punjabi and English.

The empires and dynasties that have ruled parts or all of North India include:

The Delhi Sultanate, Mughal and British Indian Empires had Delhi as their capital for some or all of their rule.

"North of the Vindhyas"

One demarcation between northern and southern nations has been the Vindhya mountain range. In centuries past this sometimes formed a border during periods of imperial expansion, such as the one ruled by the Gupta emperor Samudragupta. The Vindhyas also find mention in the narrative of Rishi Agastya as a dividing feature between North and South India. The Manusmṛti also describes the southern limit of Aryavarta (i.e. the abode of the Aryans) as being defined by the Vindhya range.

Several sources consider sizable Muslim populations and deep-seated Islamic, Central Asian and Afghan influences to be defining characteristics of North Indian culture, both linguistically and culturally. Some of these influences are pre-Islamic, such as the Bactrian-originated Kushan Empire (modern day Afghanistan) that maintained twin capitals in Mathura (now in Uttar Pradesh) and Peshawar (in the present-day Pakistani Khyber Pakhtunkhwa province), as well as the Hun confederacies that periodically asserted their rule over large parts of North India. 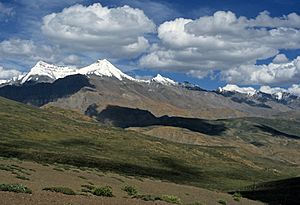 Shilla (7026 m) above the Spiti Valley in Himachal Pradesh 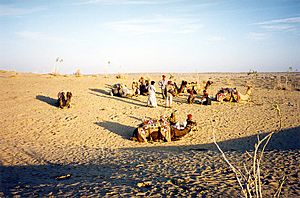 The Thar desert near Jaisalmer, Rajasthan

North India lies mainly on continental India, north of peninsular India.[Which part lies on insular India?] Towards its north are the Himalayas which define the boundary between the Indian subcontinent and the Tibetan plateau. To its west is the Thar desert, shared between North India and Pakistan and the Aravalli Range, beyond which lies the state of Gujarat. The Vindhya mountains are, in some interpretations, taken to be the southern boundary of North India.

The predominant geographical features of North India are:

The state of Madhya Pradesh has large areas under forest cover, as do Himachal Pradesh, Uttarakhand and Chhattisgarh. 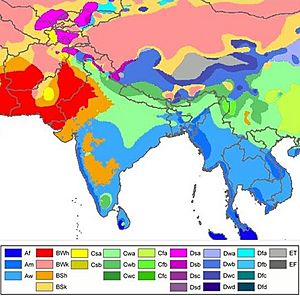 North India lies mainly in the north temperate zone of the Earth. Though cool or cold winters, hot summers and moderate monsoons are the general pattern. North India is one of the most climatically diverse regions on Earth. During summer, the temperature often rises above 35 °C across much of the Indo-Gangetic plain, reaching as high as 50 °C in the Thar desert, Rajasthan and up to 49 in Delhi. During winter, the lowest temperature on the plains dips to below 5 °C, and below the freezing point in some states. Heavy to moderate snowfall occurs in Himachal Pradesh, J&K and Uttarakhand. Much of North India is notorious for heavy fog during winters.

Extreme temperatures among inhabited regions have ranged from −45 °C (−49 °F) in Dras, Jammu and Kashmir to 50.6 °C (123 °F) in Alwar, Rajasthan. Dras is claimed to be the second-coldest inhabited place on the planet (after Siberia), with a recorded low of -60 °C.

The people of North India mostly belong to the Indo-Aryan ethno linguistic branch, and include various ethnic groups such as Brahmins, Rajputs, Banias, Jats, Ahirs, Gurjars, Kolis, Khatris, Kambojs and Dalits. Other minority ethno-linguistic communities such as Dravidian, Tibeto-Burman and Austroasiatic exist throughout the region.

Hinduism is the dominant religion in North India. Other religions practiced by various ethnic communities include Islam, Sikhism, Jainism, Zoroastrianism, Judaism, Bahá'í, Christianity, and Buddhism. The states of Uttarakhand, Rajasthan, Haryana, Madhya Pradesh, Gujarat and Himachal Pradesh are overwhelmingly Hindu. The states of Uttar Pradesh, Bihar and West Bengal have Hindu majorities with a significantly large minority of Muslims; the combined Muslim population of these three states surpasses many of the biggest Islamic nations. Jammu and Kashmir is a Muslim majority state while Punjab has a Sikh majority population. 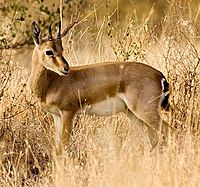 North Indian vegetation is predominantly Tropical evergreen and Montane . Of the evergreen trees Hollong Gurjan, sal, teak, Mahogany, sheesham (Indian rosewood) and poplar are some which are important commercially. The Western Himalayan region abounds in chir, pine, deodar (Himalayan cedar), blue pine, spruce, various firs, birch and junipers. The birch, especially, has historical significance in Indian culture due to the extensive use of birch paper (Sanskrit: bhurja patra) as parchment for many ancient Indian texts. The Eastern Himalayan region consists of oaks, laurels, maples, rhododendrons, alder, birch and dwarf willows. Reflecting the diverse climatic zones and terrain contained in the region, the floral variety is extensive and ranges from Alpine to Cloud forests, coniferous to evergreen, and thick tropical rainforests to cool temperate woods.

Reptiles are represented by a large number of snake and lizard species, as well as the ghariyal and crocodiles. Venomous snakes found in the region include king cobra and krait. Various scorpion, spider and insect species include the commercially useful honeybees, silkworms and lac insects. The strikingly coloured bir bahuti is also found in this region.

Important national parks and tiger reserves of North India include: 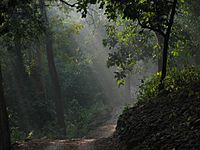 Corbett National Park: It was established in 1936 as Hailey National Park along the banks of the Ramganga River. It is India's first National Park, and was designated a Project Tiger Reserve in 1973. Situated in Nainital district of Uttarakhand, the park acts as a protected area for the critically endangered Bengal tiger of India. Cradled in the foothills of the Himalayas, it comprises a total area of 500 km2 out of which 350 km2 is core reserve. This park is known not only for its rich and varied wildlife but also for its scenic beauty.

Nanda Devi National Park and Valley of Flowers National Park: Located in West Himalaya, in the state of Uttarakhand, these two national parks constitute a biosphere reserve that is in the UNESCO World Network of Biosphere Reserves since 2004. The Valley of Flowers is known for its meadows of endemic alpine flowers and the variety of flora, this richly diverse area is also home to rare and endangered animals.

Dachigam National Park: Dachigam is a higher altitude national reserve in the state of Jammu and Kashmir that ranges from 5,500 to 14,000 feet above sea level. It is home to the hangul (a red deer species, also called the Kashmir stag).

Great Himalayan National Park: This park is located in Himachal Pradesh and ranges in altitude from 5,000 to 17,500 feet. Wildlife resident here includes the snow leopard, the Himalayan brown bear and the musk deer.

Kanha National Park: The sal and bamboo forests, grassy meadows and ravines of Kanha were the setting for Rudyard Kipling's collection of stories, "The Jungle Book". The Kanha National Park in Madhya Pradesh came into being in 1955 and forms the core of the Kanha Tiger Reserve, created in 1974 under Project Tiger.

Vikramshila Gangetic Dolphin Sanctuary: Located in the state of Bihar, it is the only protected zone for the endangered Ganges and Indus river dolphin.

Bharatpur Bird Sanctuary: It is one of the finest bird parks in the world, it is a reserve that offers protection to faunal species as well. Nesting indigenous water birds as well as migratory water birds and waterside birds, this sanctuary is also inhabited by sambar, chital, nilgai and boar.

Dudhwa National Park: It covers an area of 500 km2 along the Indo-Nepal border in Lakhimpur Kheri district of Uttar Pradesh, is best known for the barasingha or swamp deer. The grasslands and woodlands of this park, consist mainly of sal forests. The barasingha is found in the southwest and southeast regions of the park. Among the big cats, tigers abound at Dudhwa. There are also a few leopards. The other animals found in large numbers, are the Indian rhinoceros, elephant, jungle cats, leopard cats, fishing cats, jackals, civets, sloth bears, sambar, otters, crocodiles and chital.

Ranthambhore National Park: It spans an area of 400 km2 with an estimated head count of thirty two tigers is perhaps India's finest example of Project Tiger, a conservation effort started by the government in an attempt to save the dwindling number of tigers in India. Situated near the small town of Sawai Madhopur it boasts of variety of plant and animal species of North India.

Kalesar National Park: Kalesar is a sal forest in the Shivalik Hills of eastern Haryana state. Primarily known for birds, it also contains a small number of tigers and panthers. 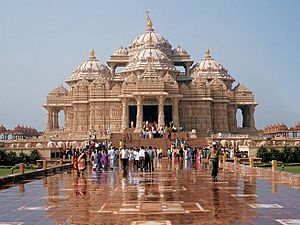 The Indian Himalayas, the Thar desert and the Indo-Gangetic plain dominate the natural scenery of North India. The region encompasses several of the most highly regarded hill destinations of India such as Srinagar, Shimla, Manali, Nainital, Mussoorie, Kausani and Mount Abu. Several spots in the states of Uttarakhand and Himachal Pradesh provide panoramic views of the snow-clad Himalayan range. The Himalayan region also provides ample opportunity for adventure sports such as mountaineering, trekking, river rafting and skiing. Camel or jeep safaris of the Thar desert are also popular in the state of Rajasthan. North India includes several national parks such as the Nanda Devi Biosphere Reserve, Jim Corbett National Park, Keoladeo National Park and Ranthambore National Park.

North India encompasses several of the holiest pilgrimage centres of Hinduism (Varanasi, Haridwar, Allahabad, Char Dham, Vaishno Devi, Rishikesh, Ayodhya, Mathura/Vrindavan, Pushkar, Prayag and seven of the twelve Jyotirlinga sites), the most sacred destinations of Buddhism (Bodh Gaya, Sarnath and Kushinagar), the most regarded pilgrimage centres of Sikhism (Amritsar and Hemkund) and some of the highly regarded destinations in Sufi Islam (Ajmer and Delhi). The largest Hindu temple, Akshardham Temple, the largest Buddhist temple in India, Mahabodhi, the largest mosque in India, Jama Masjid, and the largest Sikh shrine, Golden Temple, are all in this region. 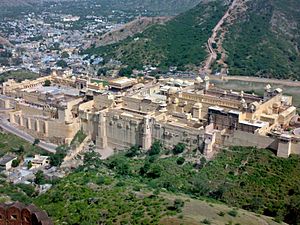 The Taj Mahal, an immense mausoleum of white marble in Agra, is one of the universally admired buildings of world heritage. Besides Agra, Fatehpur Sikri and Delhi also carry some great exhibits from the Mughal architecture. In Punjab, Patiala is known for being the city of royalty while Amritsar is a city known for its Sikh Architecture and the Golden Temple. Lucknow has the famous Awadhi Nawab culture while Kanpur reflects excellent British architecture with monuments like Edward Hall, Police Quarters, Cutchery Cemetery etc. Khajuraho temples constitute another famous world heritage site.

The state of Rajasthan is known for exquisite palaces and forts of the Rajput clans. Historical sites and architecture from the ancient and medieval Hindu and Buddhist periods of Indian history, such as Jageshwar, Deogarh and Sanchi, as well as sites from the bronze age Indus Valley Civilization, such as Manda and Alamgirpur, can be found scattered throughout northern India. Varanasi, on the banks of the River Ganga, is considered one of the oldest continuously inhabited cities in the world and the second oldest in India after Nalanda. Bhimbetka is an archaeological site of the Paleolithic era, exhibiting the earliest traces of human life on the Indian subcontinent.

All content from Kiddle encyclopedia articles (including the article images and facts) can be freely used under Attribution-ShareAlike license, unless stated otherwise. Cite this article:
North India Facts for Kids. Kiddle Encyclopedia.