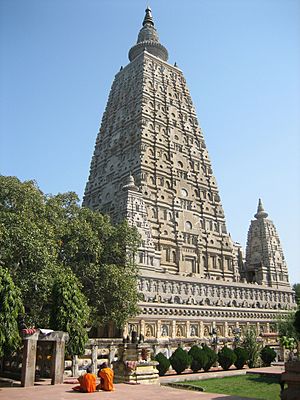 The Mahabodhi Temple (literally: "Great Awakening Temple") or the Mahabodhi Mahavihar, a UNESCO World Heritage Site, is an ancient, but much rebuilt and restored, Buddhist temple in Bodh Gaya, marking the location where the Buddha is said to have attained enlightenment. The site contains a descendant of the Bodhi Tree under which Buddha gained enlightenment, and has been a major pilgrimage destination for Hindus and Buddhists for well over two thousand years, and some elements probably date to the period of Ashoka (died c. 232 BCE). It is the "National Buddhist temple of India" respectively.

All content from Kiddle encyclopedia articles (including the article images and facts) can be freely used under Attribution-ShareAlike license, unless stated otherwise. Cite this article:
Mahabodhi Temple Facts for Kids. Kiddle Encyclopedia.