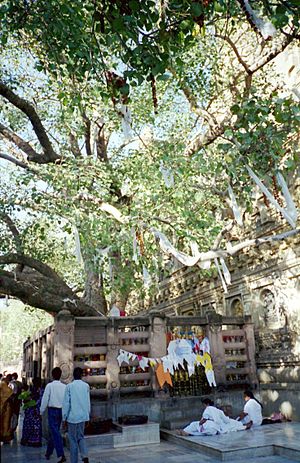 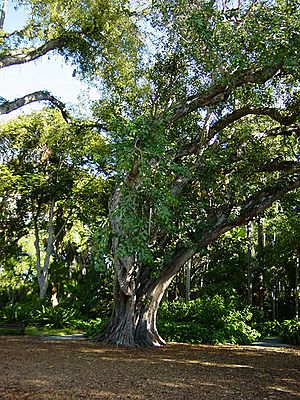 A direct clone descendant of the Bodhi tree, planted at Foster Botanical Garden in Honolulu, Hawaii

The Bodhi Tree was a large and very old Sacred Fig tree (Ficus religiosa). It was at the Mahabodhi Temple at Bodh Gaya. Siddhartha Gautama, the spiritual teacher and founder of Buddhism, later known as Gautama Buddha, achieved Bodhi (spiritual enlightenment) while sitting under this tree. The Bodhi tree is easily recognised because of its heart-shaped leaves.

The word "Bodhi tree" is also widely applied to existing trees, particularly the Sacred Fig growing at the Mahabodhi Temple, which is probably a direct descendant of the original tree. This tree is a frequent place for pilgrims to visit, being the most important of the four holy sites for Buddhists.

The Bodhi tree at the Mahabodhi Temple is called the Sri Maha Bodhi. According to Buddhism, after his Enlightenment, Buddha spent a whole week in front of the tree, standing with unblinking eyes, gazing at it with gratitude. A shrine was later built where he had stood.

The spot was used as a shrine even in the lifetime of Buddha, the only shrine that could be so used. King Asoka held a festival every year in its honor in the month of Kattika. His queen, Tissarakkhā was jealous of the Tree, and three years after she became queen (i.e., in the nineteenth year of Asoka's reign), she caused the tree to be killed by means of mandu thorns. The tree, however, grew again, and a great monastery was attached to the Bodhimanda called the Bodhimanda Vihara. Among those present at the foundation of the Mahā Thūpa are mentioned thirty thousand monks from the Bodhimanda Vihara, led by Cittagutta.

While the Buddha was still alive, so that people might make their offerings in the name of the Buddha when he was away on pilgrimage, he approved the planting of a seed from the Bodhi tree in Bodhgaya in front of the gateway of Jetavana Monastery near Sravasti. For this purpose Moggallana took a fruit from the tree as it dropped from its stalk, before it reached the ground. It was planted in a golden jar by Anathapindika with great pomp and ceremony. A sapling immediately sprouted forth, fifty cubits high, and in order to consecrate it the Buddha spent one night under it, rapt in meditation. This tree, because it was planted under the direction of Ananda, came to be known as the Ananda Bodhi.

The Sri Maha Bodhi in Sri Lanka was planted in 288 BC, making it the oldest verified specimen of any angiosperm. In this year (the twelfth year of King Asoka's reign) the right branch of the Bodhi tree was brought by Sanghamittā to Anurādhapura and placed by Devānāmpiyatissa in the Mahāmeghavana. Buddha, on his death bed, had resolved five things, one being that the branch which should be taken to Ceylon should detach itself. From Gayā, the branch was taken to Pātaliputta, then to Tāmalittī, where it was placed in a ship and taken to Jambukola, across the sea; finally it arrived at Anuradhapura, staying on the way at Tivakka. Those who assisted the king at the ceremony of the planting of the Tree were the nobles of Kājaragāma and of Candanagāma and of Tivakka. A sapling of this tree was planted in the Buddha Jayanti Park in New Delhi, India in 1993.

The trees of other Buddhas

According to the Ceylon Chronicles (e.g., Mhv.xv), branches from the Bodhi trees of all the Buddhas born during this kalpa were planted in Ceylon on the spot where the sacred Bodhi tree stands today in Anurādhapura. The branch of Kakusandha's tree was brought by a nun called Rucānandā, Konagamana's by Kantakānandā (or Kanakadattā), and Kassapa's by Sudhammā.

All content from Kiddle encyclopedia articles (including the article images and facts) can be freely used under Attribution-ShareAlike license, unless stated otherwise. Cite this article:
Bodhi Tree Facts for Kids. Kiddle Encyclopedia.