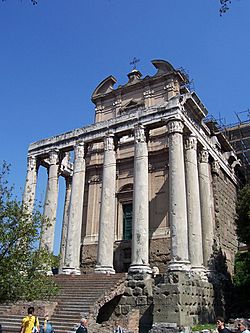 A temple is a building where people go to practice their religion. In a temple people may perform religious rituals, ceremonies, and pray. Thus, a temple is a general term for a house of worship. Christians usually call their religious buildings churches.

Some examples of temples from different religions:

All content from Kiddle encyclopedia articles (including the article images and facts) can be freely used under Attribution-ShareAlike license, unless stated otherwise. Cite this article:
Temple Facts for Kids. Kiddle Encyclopedia.