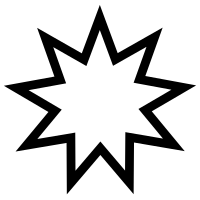 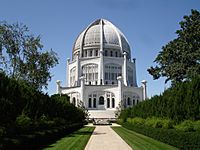 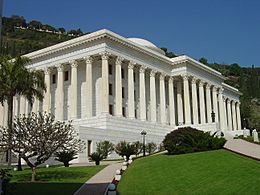 Home of the Universal House of Justice in Haifa, Israel, the council that leads the Bahá'ís

The Bahá'í Faith is an Abrahamic religion started in the 1800s by an Iranian person called Bahá'u'lláh who was born in Tehran, Iran. Followers of this religion call themselves Bahá'ís. The name Bahá'u'lláh is Arabic for "The Glory of God". "Glory" is a word that means "importance", "power", and "beauty". Bahá'ís believe Bahá'u'lláh is a representation of God, or speaks for God, and he shows people God's importance, beauty, and brightness.

Bahá'ís are monotheists (which means that they believe in one God). They believe Bahá'u'lláh carried a message from God. Bahá'u'lláh said he was not the only person to carry a message from God, and he was not the last to carry a message from God. He taught that the people who started the other major religions also represented and carried messages from God, such as Jesus, Moses, Abraham, Muhammad, Krishna, the Buddha and others. He called these people "Manifestations of God." They believe the messages from the Manifestations of God get more and more difficult to understand. They say the ones that came earlier on had a more simple message than the ones that came later. Because God is greater than the whole universe, Bahá'u'lláh said that human beings cannot completely know God. He said that God wants people to know as much about him as they can. Bahá'u'lláh wrote God sends special people to manifest (show) himself to ordinary humans. Without the Manifestations of God we could not know God. Bahá'ís believe the God they pray to is the same God Abraham spoke to, Jesus talked about, and Krishna said in Gita. Since Bahá'u'lláh was born in a Muslim family, Bahá'ís are sometimes mistaken as Muslims. Bahá'u'lláh is considered the prophet/manifestation of the present day. Bahá'ís say that he is not the last prophet/manifestation of God. They think there will not be another prophet for 1,000 years after Baha'u'llah's death.

The Bahá'í Faith began on 1844 when a man called the Báb said he had a message from God. He said that it was his job to make sure that people were ready for the most important message from God who would be sent soon. This started a religion, followers of this religion were called Bábís. Many people became Bábís in the country of Iran, which was called Persia at the time, and this made the government of Persia and the Muslim priests angry. They arrested and killed the Bab and his followers. Even though this happened, people still followed this religion.

Before Bahá'u'lláh said he had a message from God, he was a member of the religion that was started by the Báb. He became very famous among the Bábís. When the Báb was killed, some Bábís got very angry and tried to kill the king of Persia, even though Bahá'u'lláh told them not to kill him. When the Babis were caught, the government put many Bábís in jail, including Bahá'u'lláh. While in jail at Tehran, Bahá'u'lláh said he saw an angel that he called the "maid of heaven". The angel told him that he had to teach a message from God to the people of the world. The angel said that God would rescue and protect him so that he could teach this message. Eventually, he was released from jail and the government of Persia made him move to Baghdad, which was then controlled by the king of the Ottoman Empire.

While Baha'u'llah was in Baghdad, he had many problems, but he also made many friends. The government of Persia was unhappy that he seemed to be doing well in Baghdad, and so they asked the Ottoman Empire to move him further away from Persia. When he was about to leave, in 1863, he held a festival for 12 days on a small island in the Tigris river, which he called Ridvan, which means paradise. There he told some of his closest friends and family that he was the promised one of all of the major religions, and that eventually the whole world would know his message.

Eventually the Ottoman Empire sent him to many different cities, including Constantinople, Adrianople, Alexandria, and eventually Akka. He was in different jails this whole time, and the city of Akka had a big wall around it, and it was one big jail. While he was in Baghdad, and after, he wrote many books and letters to answer questions that his friends and followers asked him. At one point he was poisoned, so that he could not write anymore because his hands shook so badly. After that, he had someone write down what he said. When he was even older, his oldest son, `Abdu'l-Bahá arranged to have him move into a house near Mount Carmel, and he stayed there until he finally died in 1892.

After he died, people followed `Abdu'l-Bahá. Bahá'u'lláh had written that `Abdu'l-Bahá had special powers, and that God would make sure that if `Abdu'l-Bahá explained anything that Bahá'u'lláh said, then the Bahá'ís should believe that explanation. `Abdu'l-Bahá also wrote a lot of letters and gave talks, and eventually visited Paris, London, Montreal, New York City, San Francisco and other cities in the west. This helped the Bahá'í Faith to spread in Europe and North America. He died in 1921. He left a will, where he told the Bahá'ís to follow his grandson, Shoghi Effendi.

Shoghi Effendi was born in 1900 and was only a young man when his grandfather died and he became the leader of the Bahá'ís. He helped make the different agencies and councils that run the Bahá'í Faith today, and organized the religion in many ways. He also wrote many books and letters to explain the teachings of his grandfather and great-grandfather. He lived until 1957 and died in England.

Bahá'ís also believe that the Bible, the Qur'an, the Gita and other books from other religions are special.

Some important Bahá'í beliefs are:

There are eight or nine million Bahá'ís in the world, of all peoples and languages. The Bahá'í Faith looks different in different countries, because there are few rituals, so Bahá'ís can include their own culture in the way they celebrate Bahá'í events, say prayers, etc.

Bahá'ís meet every nineteen (19) days in a meeting called a "Feast". There does not have to be food, but there usually is. These meetings start with prayers and usually someone reads aloud some holy writings. Sometimes there is music and song, sometimes plays, sometimes just quiet time or meditation. After this time, which Bahá'ís call the "devotional" time in a feast, they have a community discussion. All sorts of topics can be discussed here that are important to the members. Bahá'ís say that this is a "consultative" time, where Bahá'ís can consult with each other. After this, there is a social time, where people can share food, drink (not alcohol), and sometimes here there is also music, or plays, or presentations, or other entertainment. This time is just so that the Bahá'ís in that city can get to know each other and become better friends.

Bahá'ís often do not have one place they get together, except in large cities. In smaller places they usually get together in each other's houses. Some larger cities have "Bahá'í Centers" which can be used for community meetings, classes, or for meetings of committees and other councils. (see Institutions below)

In a very few cities in the world, there are Bahá'í temples. These temples are on each continent.

Bahá'ís are organized in a worldwide community. They do not have priests. Everyone is responsible for their own prayers. Bahá'ís are also responsible for reading their holy books for themselves and for learning about their religion. Baha'is elect leaders for their community, to help organize their activities, and to deal with problems between members, and to decide things that are not obvious from the scriptures. These are called Spiritual Assemblies, but will one day be called Houses of Justice. 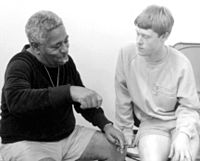 John Birks "Dizzy" Gillespie was born October 21, 1917 in Cheraw, South Carolina and died January 6, 1993. Dizzy was a Bahá'í since about 1970, was one of the most famous adherents of the religions which helped him make sense of his position in a succession of trumpeters as well as turning his life from knife-carrying roughneck to global citizen, and from alcohol to "soul force", in the words of author Nat Hentoff, who knew Gillespie for forty years. Gillespie's conversion was most affected by Bill Sear's book Thief in the Night. Gillespie spoke about the Bahá'í Faith frequently on his trips abroad.

All content from Kiddle encyclopedia articles (including the article images and facts) can be freely used under Attribution-ShareAlike license, unless stated otherwise. Cite this article:
Bahá'í Faith Facts for Kids. Kiddle Encyclopedia.