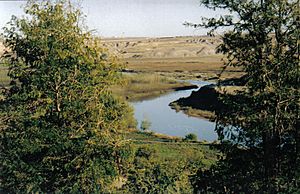 The river Tigris, near Diyarbakir, in Turkey 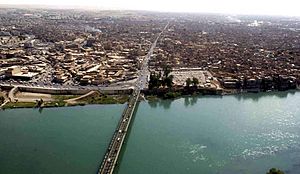 The river, in Mosul, in Iraq

The Tigris is a river in the Middle East. It is the eastern of two rivers that define Mesopotamia. Mesopotamia literally means (the land) between the rivers. The other river is called Euphrates. The source of the river is in the Taurus mountains in Turkey. From there, it flows through Northern Kurdistan in Turkey and forms part of the border between Turkey and Syria. The remainder is in Iraq.

The river is 1,900 kilometres (1,181 miles) long. It comes together with the Euphrates in the Shatt-al-Arab (which is called Arvand Rud in Persian). The Shatt-al-Arab flows into the Persian Gulf. The river had an important role in the development of civilization, as early farmers used water from the river to water their crops and produce more food.

All content from Kiddle encyclopedia articles (including the article images and facts) can be freely used under Attribution-ShareAlike license, unless stated otherwise. Cite this article:
Tigris Facts for Kids. Kiddle Encyclopedia.