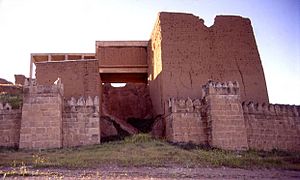 A reconstruction of the Adad Gate

Nineveh was an ancient Assyrian city on the eastern side of the Tigris River. It was the capital and a major city of the Assyrian empire. Its ruins are across the river from the modern-day city of Mosul, Iraq.

The ruins of Nineveh are surrounded by the remains of a massive stone and mudbrick wall dating from about 700 BC. The wall was bout 12 km in length. The stone retaining wall had projecting stone towers spaced about every 18 metres (59 ft). The stone wall and towers were topped by three-step parapets.

The city wall had fifteen monumental gateways. They were checkpoints for people entering and exiting the city. They probably had barracks and armouries. With the inner and outer doors shut, the gateways were fortresses. The gateways had passages and interior chambers lined with finely cut stone. A stairway led from one of the interior chambers to the top of the mudbrick wall.

All content from Kiddle encyclopedia articles (including the article images and facts) can be freely used under Attribution-ShareAlike license, unless stated otherwise. Cite this article:
Nineveh Facts for Kids. Kiddle Encyclopedia.