Sargon of Akkad facts for kids 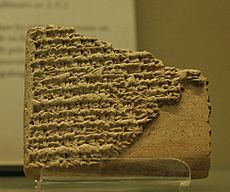 Clay tablet relating the birth of Sargon and his quarrel with king Ur-Zababa of Kish. Tablet from paleo-Babylonian period (beginning of the 2nd millennium BC). Now dated: Sargon of Akkad, reign about 2270 to 2215 BC. (Late 3rd millennium BC). From the Louvre Museum, Paris. 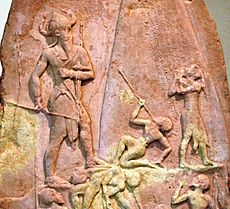 Stele of Naram-Sin, Sargon's grandson, celebrating his victory against the Lullubi from Zagros

Sargon was one of the first people in recorded history to create an empire, or multi-ethnic state. His empire included the land between the Tigris and Euphrates rivers, and part of what is present-day Turkey.

His capital was called Agade in the Akkadian language.

Sargon of Akkad may have been the same person as the first Sargon of Assyria (also known as Sharrukin or Sharru-kin). Sargon's empire would probably have included Assyria. He is listed in the Assyrian king list as the son of Ikunum and the founder of a dynasty. He became a prominent member of the royal court of Kish, ultimately overthrowing its king before embarking on the conquest of Mesopotamia.

Sargon's vast empire is known to have extended from Elam to the Mediterranean Sea, including Mesopotamia, parts of modern-day Iran and Syria, and possibly parts of Anatolia and the Arabian peninsula. He ruled from a new capital, Akkad, which the Sumerian king list claims he built on the left bank of the Euphrates. He is sometimes regarded as the first person in recorded history to create a multiethnic, centrally ruled empire, although the Sumerians Lugal-anne-mundu and Lugal-zage-si also have a claim. His dynasty controlled Mesopotamia for around a century and a half.

The Akkadian language was made the official language of international discourse. During Sargon's reign, Akkadian was standardized and adapted for use with the cuneiform script, which was previously used for the Sumerian language. A style of calligraphy developed in which text on clay tablets and cylinder seals was arranged amidst scenes of mythology and ritual.

All content from Kiddle encyclopedia articles (including the article images and facts) can be freely used under Attribution-ShareAlike license, unless stated otherwise. Cite this article:
Sargon of Akkad Facts for Kids. Kiddle Encyclopedia.