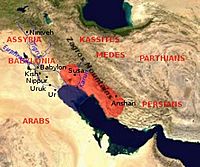 Map showing the area of the Elamite Empire (in red) and the neighboring areas. The approximate Bronze Age extension of the Persian Gulf is shown. 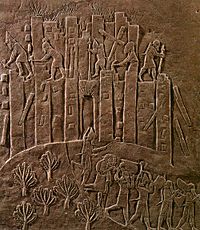 Ashurbanipal's campaign against Susa is triumphantly recorded here. It shows the sack of Susa in 647 BC: flames rise from the city as Assyrian soldiers topple it with pickaxes and crowbars and carry off the spoils

Elam was an long-lasting ancient civilization just to the east of Mesopotamia, in what is now southwest Iran. Elam was centered in the far west and southwest of what is now modern-day Iran, stretching from the lowlands of what is now Khuzestan and Ilam Province as well as a small part of southern Iraq..

Knowledge of Elamite history is not complete. It is mainly known from Mesopotamian sources. The history of Elam is divided into three periods, over more than two millennia. The three periods come after the proto-Elamite period:

The Proto-Elamite city of Susa was founded around 5000 BC in the watershed of the river Karun. It is considered to be the site of Proto-Elamite cultural formation.

Written records start from around 3000 BC in the Old Elamite period (Middle Bronze Age). In the Achaemenid Empire the Elamite language was among those in official use. The Elamite language has no obvious connections with any other, and seems to be a language isolate like Sumerian. Some researchers have suggested the existence of a larger group known as Elamo-Dravidian. This theory is not established.

The Elamites called their country Haltamti, but the Sumerians and Akkadians called it Elam, and so it was also in the Hebrew Bible. The civilisation started around 2700 BC, and they were finally conquered by the Achmaenids in 640 BC. A tablet found in 1848 has the Assyrian king Ashurbanipal boasting of his conquest:

"Susa, the great holy city, abode of their Gods, seat of their mysteries, I conquered. I entered its palaces, I opened their treasuries where silver and gold, goods and wealth were amassed...I destroyed the ziggurat of Susa. I smashed its shining copper horns. I reduced the temples of Elam to naught; their gods and goddesses I scattered to the winds. The tombs of their ancient and recent kings I devastated, I exposed to the sun, and I carried away their bones toward the land of Ashur. I devastated the provinces of Elam and on their lands I sowed salt.

As it happens, the Elamites managed to stay independent for some time after this disaster. The devastation was less complete than Assurbanipal boasted, and Elamite rule, though rather broken up, continued until 540 BC, when Achaemenid rule begins in Susa. Under the Parthian period, a kingdom of Elymais existed which survived until its extinction by Sassanid invasion in the early third century AD. It was in the heartland of ancient Elam.

All content from Kiddle encyclopedia articles (including the article images and facts) can be freely used under Attribution-ShareAlike license, unless stated otherwise. Cite this article:
Elam Facts for Kids. Kiddle Encyclopedia.