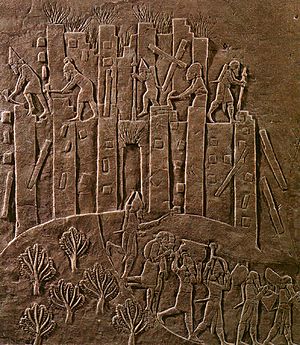 Susa (Ancient Greek: τά Σοῦσα) was an ancient Iranian city. It was part of the Elamite, Persian and Parthian empires. It is located in the lower Zagros Mountains. It is about 250 km (160 mi) east of the Tigris River and is between the Karkheh and Dez Rivers. There is a modern Iranian town in the same place as Susa. It is called Shush.

All content from Kiddle encyclopedia articles (including the article images and facts) can be freely used under Attribution-ShareAlike license, unless stated otherwise. Cite this article:
Susa Facts for Kids. Kiddle Encyclopedia.