Kids Encyclopedia Facts
For the stone sculpture in Egypt, see The Great Sphinx. For the breed of cat, see Sphynx cat. 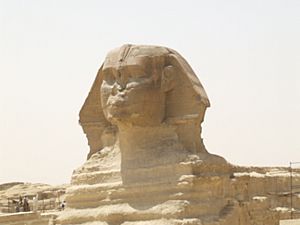 The Great Sphinx of Giza is a famous archaeological structure

A sphinx is a mythical creature with the head of a human and the body of a lion.

In Greek tradition, the sphinx has the head of a woman, the haunches of a lion, and the wings of a bird. She is mythicised as treacherous and merciless. Those who cannot answer her riddle suffer a fate typical in such mythological stories, as they are killed and eaten by this ravenous monster. This deadly version of a sphinx appears in the myth and drama of Oedipus.

Unlike the Greek sphinx, which was a woman, the Egyptian sphinx is typically shown as a man (an androsphinx (Ancient Greek: ανδρόσφιγξ)). In addition, the Egyptian sphinx was viewed as benevolent, but having a ferocious strength similar to the malevolent Greek version. Both were thought of as guardians, and often flank the entrances to temples.

In European decorative art, the sphinx enjoyed a major revival during the Renaissance. Later, the sphinx image, initially very similar to the original Ancient Egyptian concept, was exported into many other cultures, albeit there often interpreted quite differently due to translations of descriptions of the originals and through evolution of the concept in relation to other cultural traditions.

Sphinx depictions are generally associated with architectural structures such as royal tombs or religious temples. The oldest known sphinx was found 195 kilometres (120 mi) to the east at Körtik Tepe, Turkey, and was dated to 9,500 BCE. 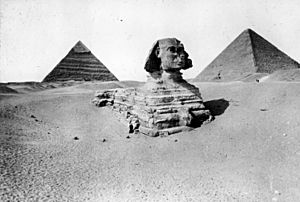 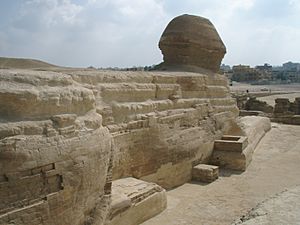 Back of the Great Sphinx, Giza, Egypt

The largest and most famous sphinx is the Great Sphinx of Giza, situated on the Giza Plateau adjacent to the Great Pyramids of Giza on the west bank of the Nile River and facing east (29°58′31″N 31°08′15″E﻿ / ﻿29.97528°N 31.13750°E﻿ / 29.97528; 31.13750). The sphinx is located southeast of the pyramids. While the date of its construction is not known for certain, general consensus among egyptologists is that the head of the Great Sphinx bears the likeness of the pharaoh Khafra, while a fringe minority of late 20th century geologists have claimed evidence of water erosion in and around the Sphinx enclosure which would prove that the Sphinx predates Khafra, a claim that is sometimes referred to as the Sphinx water erosion hypothesis, but which has little support among egyptologists.

What names their builders gave to these statues is not known. At the Great Sphinx site, a 1400 BCE inscription on a stele belonging to the 18th dynasty pharaoh Thutmose IV lists the names of three aspects of the local sun deity of that period, Khepera–Rê–Atum. Many pharaohs had their heads carved atop the guardian statues for their tombs to show their close relationship with the powerful solar deity Sekhmet, a lioness. Besides the Great Sphinx, other famous Egyptian sphinxes include one bearing the head of the pharaoh Hatshepsut, with her likeness carved in granite, which is now in the Metropolitan Museum of Art in New York, and the alabaster sphinx of Memphis, Memphis, Egypt, currently located within the open-air museum at that site. The theme was expanded to form great avenues of guardian sphinxes lining the approaches to tombs and temples as well as serving as details atop the posts of flights of stairs to very grand complexes. Nine hundred sphinxes with ram heads, representing Amon, were built in Thebes, where his cult was strongest.

The Great Sphinx has become an emblem of Egypt, frequently appearing on its stamps, coins, and official documents. 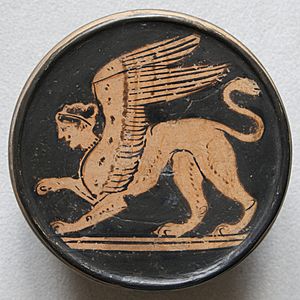 In the Bronze Age, the Hellenes had trade and cultural contacts with Egypt. Before the time that Alexander the Great occupied Egypt, the Greek name, sphinx, was already applied to these statues. The historians and geographers of Greece wrote extensively about Egyptian culture. Herodotus called the ram-headed sphinxes Criosphinxes and called the hawk-headed ones Hieracosphinxes.

The word sphinx comes from the Greek Σφίγξ, apparently from the verb σφίγγω (sphíngō), meaning "to squeeze", "to tighten up". This name may be derived from the fact that, in a pride of lions, the hunters are the lionesses, and kill their prey by strangulation, biting the throat of prey and holding them down until they die. However, the historian Susan Wise Bauer suggests that the word "sphinx" was instead a Greek corruption of the Egyptian name "shesepankh", which meant "living image", and referred rather to the statue of the sphinx, which was carved out of "living rock" (rock that was present at the construction site, not harvested and brought from another location), than to the beast itself.

Apollodorus describes the sphinx as having a woman's face, the body and tail of a lion and the wings of a bird. Pliny the Elder mentions that Ethiopia produces plenty of sphinxes, with brown hair and breasts. Statius describes her as a winged monster, with pallid cheeks, eyes tainted with corruption, plumes clotted with gore and talons on livid hands. Sometimes, the wings are specified to be those of an eagle, and the tail to be serpent-headed.

There was a single sphinx in Greek mythology, a unique demon of destruction and bad luck. According to Hesiod, she was a daughter of Orthrus and either Echidna or the Chimera, or perhaps even Ceto;. According to Apollodorus and Lasus, she was a daughter of Echidna and Typhon. All of these are chthonic figures from the earliest of Greek myths, before the Olympians ruled the Greek pantheon. The Sphinx is called Phix (Φίξ) by Hesiod in line 326 of the Theogony

The sphinx was the emblem of the ancient city-state of Chios, and appeared on seals and the obverse side of coins from the 6th century BCE until the 3rd century CE.

All content from Kiddle encyclopedia articles (including the article images and facts) can be freely used under Attribution-ShareAlike license, unless stated otherwise. Cite this article:
Sphinx Facts for Kids. Kiddle Encyclopedia.