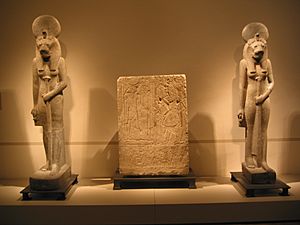 Two statues of Sekhmet (standing) in the Egyptian Museum of Berlin 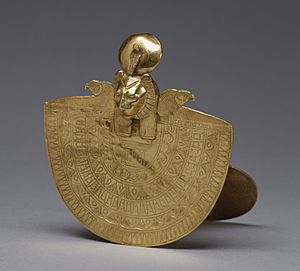 This golden cultic object is called an aegis. It is devoted to Sekhmet, highlighting her solar attributes. Walters Art Museum, Baltimore. 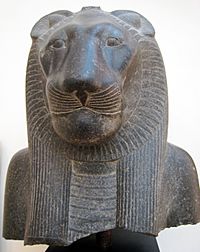 Sekhmet from the temple of Mut at Luxor, granite, 1403–1365 B.C., in the National Museum, Copenhagen

Image from a ritual Menat necklace, depicting a ritual being performed before a statue of Sekhmet on her throne, she also is flanked by the goddess Wadjet as the cobra and the goddess Nekhbet as the white vulture, symbols of lower and upper Egypt respectively who always were depicted on the crown of Egypt and referred to as the two ladies, and the supplicant holds a complete menat and a sistrum for the ritual, circa 870 B.C. (Berlin, Altes Museum, catalogue number 23733)

In Egyptian mythology, Sekhmet was the goddess of fire and war. She had the head of a lioness and the body of a woman. She was married to Ptah, the god of healing. They balanced each other. It was believed that her breath created the desert. Sometimes known as sister to Bastet/Bast, a goddess who protected pregnant women and children.

Sekhmet had the head of a lioness and the body of a woman. She was usually depicted with a sun disc on top of her head. Many historians argue that she was from Sudan, since lions were plentiful there. When she was seated, she usually held the ankh of life, but when she was standing, she held a papyrus scepter, the symbol of Lower Egypt.

Sekhmet's breath represented a hot desert wind, and her body was the glare of the midday sun. She was created when Hathor came down to earth to take vengeance on man. Sekhmet became the destructive eye of the sun, and a solar goddess, and was named “Eye of Ra.” The ancient Egyptians knew that the sun could bring life, (Hathor), but also death. (Sekhmet). Her name translates as "The Powerful One." Sekhmet used her power destructively and brutally

The ancient Egyptians believed that sekhmet took over sun and then the next morning she gave birth to the moon.

People were afraid of Sekhmet because along with her healing and protective powers, she was also a destructive and retaliating. The ancient Egyptians believed that the "Seven Arrows of Sekhmet" would bring bad luck, so they used many charms and spells to protect themselves. There was a "Book of the Last Day of the Year" which they recited over a piece of cloth and wore around their neck at the end of the year. This was considered to be a dangerous time. On the first day of the New Year (Wep Ronpet), people would exchange amulets in the form of Sekhmet to keep the goddess happy.

Sekhmet had an unusual form of worship. She was worshipped evenly with her husband, Ptah, and her son, Nefertem. Her main cult center was in Memphis. Many priests recited complicated prayers, used to avert the rage of Sekhmet. A well-known prayer was called "The Last Day of the Year," and it was chanted while wearing a piece of cloth around one's head. The last day of the year was considered to be a dangerous period for the people, because Sekhmet usually attacked then.

Sekhmet was the Egyptian goddess of war and destruction. She was bloodthirsty, out of control, and the Egyptians thought she represented natural disasters. Her husband, Ptah, and her son, Nefertem were closely worshipped. Sekhmet was known as the lady of life, and the lady of terror. In one myth, Sekhmet terrorized the country of Egypt, crazy and thirsty for blood. Ra, the sun god, sent many swift-footed messengers to outsmart the female killing machine. she saw through all and then saw love through everything, and Sekhmet in her happiness, embranced it. She layed back and later turned into Hathor, the goddess of love.

Sekhmet’s main cult center was located in Memphis. When Amenemhat officially moved the capital of Egypt to Itjtawy, her cult center moved too. Her large similarity to Hathor brought the special erection of dual temples where citizens could worship Sekhmet and Hathor. Hundreds of statues were set up during the reign of Amenhotep III. At their bases, they emphasize Sekhmet's savagery and brutal myths.

All content from Kiddle encyclopedia articles (including the article images and facts) can be freely used under Attribution-ShareAlike license, unless stated otherwise. Cite this article:
Sekhmet Facts for Kids. Kiddle Encyclopedia.