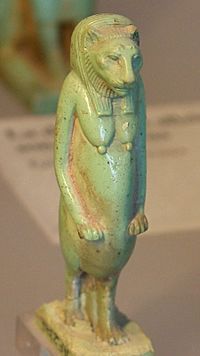 Bast as a lioness 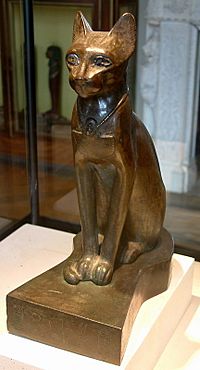 Bast as a domestic cat

Bast was the ancient Egyptian goddess of protection and cats. She was the daughter of Ra, the sun god. As protectress, she was seen as defender of the pharaoh, and consequently of the chief god, Ra.

Bast is also known as Bastet, Ubasti, and Pasch. She was worshipped at least since the Second Dynasty in Ancient Egypt. The centre of her cult was in Per-Bast (Bubastis in Greek), which was named after her. Originally she was seen as the protector goddess of Lower Egypt, and therefore her image was a fierce lion. Her name means (female) devourer.

This gentler characteristic, of Bast as goddess of perfumes, and Lower Egypt's loss in the wars between Upper and Lower Egypt meant that in the Middle Kingdom of Egypt she was seen as a domestic cat and not any more as a lionness. Because domestic cats tend to be tender and protective toward their offspring, Bast was also regarded as a good mother, and she was sometimes shown with kittens. Therefore, a woman who wanted children sometimes wore an amulet showing the goddess with kittens, the number of which showed how many children she wanted to have.

Bastet was the most honoured feline deity in Ancient Egypt. The cult of Bastet started around the town of Bubastis, located in the Eastern Delta in Lower Egypt (around 3,200 B.C.), and was an important town from the Old Kingdom through the Late Period. During early Egyptian times the city was called Per-Bast which translates into “the domain of Bast”. Later the city was called Bubastis. Today it is called Tell Basta. Other cities where Bastet was worshipped were for example: Memphis (during the Old Kingdom) where she was associated with Sekhmet, Heliopolis (during the Old Kingdom) where she was called the “Daughter of Tem” (connected to Tefnut), in a city called “Hill of Bast”, in the precinct of Mut in Thebes (during New Kingdom) when connected to Mut, and in the city of Nit (during late period). Festivals celebrating Bastet were held in the cities of Bubastis, Memphis (Luxor), Thebes and Esna.

Elaborate festivals of Bastet were called: “Procession of Bastet”, “Bastet protects the two lands”, “Bastet goes forth from Per-Bast” (her city), “Bastet appears before Ra” and the “Festival of Hathor and Bastet”. Her main festivals were celebrated in April and May in Bubastis. Her festivals were some of the most popular in Egypt, because of all the music, dancing and wine. Over 700,000 people came from all over Egypt, often in boats, sailing along the Nile. Men and women sailed together. During their journey they would sing, clap their hands, the women would shake their rattles, the men would play their flutes. Each time when they sailed past people or towns along the Nile, everybody would start singing, cheering and clapping together.

In Bubastis the festival began by making sacrifices to Bastet. The Temple of Bast stood in the town center, so one could see it from everywhere. It stood on raised ground. The outside wall of the temple was decorated with pictures of animals. Inside the temple was a courtyard, planted with a grove of trees surrounding her shrine. Worshippers came from all over Egypt, leaving offerings, bronze statues, amulets and mummified cats in her temple. Thousands of those cats were later found in underground crypts where her temple once stood.

During the days of celebration, the Egyptians spent many days making music, dancing and being joyful. Worshippers went to her temple playing instruments, beating drums, shaking tambourines, carrying sistras (sacred rattles), singing and dancing through the streets. “One aspect of the festival, however, was quite moving, and came on the last night. In a town of silence, a town of darkness, a single light would be lit inside the Temple of Bast. And from there the light would spread through the town, carried by devotees; and prayers would rise into the night, accompanied by music and incense.” Bastet, the goddess of cats, was important. She had temples where she was worshiped. The Egyptian people would give sacrifices to her like spice, water, wine, milk, bread and meat. She also would be given gold, diamonds, silver, perfumes and other riches. The people of Egypt would also dance and sing to her because she was also the goddess of dancing and singing. They also feasted in her temple to show that she was important

Bastet’s father was Ra, the God of the Sun and All Creation. Hathor (Sekment), the cow-headed god, was a daughter of Ra too. She had two sons named, Konshu, the God of the Moon, and Maahes, a lion-headed God of War. Bastet did not have a mother because Ra, as creator deity, was called “The Great He-She”. Her husband was Ptah, the god of Craftsmen, Rebirth and Creation. When associated with Isis, she could be called the “Soul of Isis”.

These are mistaken, because they are not really related like family. Rather, Sekhmet, Bastet and dozens of other goddesses were considered to be an “Eye-of-Ra”. Bastet and Sekhmet were paired, but not as opposite personalities of Bastet. They were paired geographically. The main place of Bastet’s worship was in Lower Egypt, while Sekhmet was worshipped in Upper Egypt. They traditionally called Bastet a “She of the North” and Sekhmet a “She of the South”. Sometimes Bast was also called “Lady of the East” ( Bastet as Protectress of the Eastern Delta ) and “Lady of the West” ( Sekhmet as Protectress of the Western Delta ).

All content from Kiddle encyclopedia articles (including the article images and facts) can be freely used under Attribution-ShareAlike license, unless stated otherwise. Cite this article:
Bast Facts for Kids. Kiddle Encyclopedia.