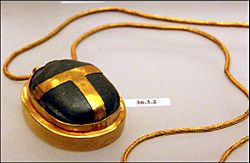 An amulet (from Latin amuletum, meaning "charm"), is an object that people think will bring good luck and or protection to its owner.

All content from Kiddle encyclopedia articles (including the article images and facts) can be freely used under Attribution-ShareAlike license, unless stated otherwise. Cite this article:
Amulet Facts for Kids. Kiddle Encyclopedia.