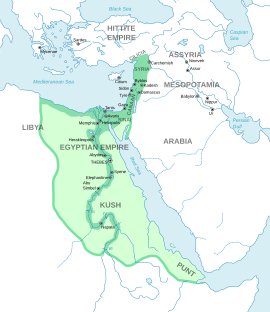 The maximum territorial extent of Egypt (XVth century BC)

The New Kingdom, is the period in ancient Egyptian history between (1570–1070 BC). During the New Kingdom Egypt was richer and more powerful than in all other periods of its history. It includes the Eighteenth, Nineteenth and Twentieth Dynasties. 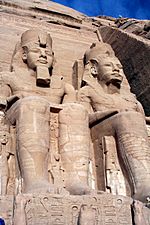 Colossal depictions of Rameses II at a temple dedicated to him at Abu Simbel.

The Eighteenth Dynasty was ruled by some of Egypt's most famous Pharaohs including Akhenaten and Tutankhamun. Queen Hatshepsut concentrated on expanding Egypt's external trade and sent a commercial expedition to the land of Punt. Thutmose III ("the Napoleon of Egypt") expanded Egypt's army and created the largest empire Egypt had ever seen.

Amenhotep IV changed his name to Akhenaten in honor of the Aten. He started a religion based on one god, Aten. This is seen as history's first instance of monotheism. Sigmund Freud in his book Moses and Monotheism said it was the ultimate origin of Jewish monotheism).

Ramesses II ("the Great") of the 19th Dynasty tried to get back territories in the Levant that had been held by the 18th Dynasty. In the Battle of Kadesh he led Egyptian armies against those of the Hittite king Muwatalli II. He was caught in the first recorded military ambush, but won the battle.

All content from Kiddle encyclopedia articles (including the article images and facts) can be freely used under Attribution-ShareAlike license, unless stated otherwise. Cite this article:
New Kingdom Facts for Kids. Kiddle Encyclopedia.