Land of Punt facts for kids

Puntland' is a province of Somalia

Land of Punt is a name for a geographic place, mentioned in Ancient Egyptian texts. At times it is also called Pwenet or Pwene. Ancient Egypt traded with this place, at least since 6.000 BC. It was known for producing and exporting gold, aromatic resins, blackwood, ebony, ivory, and wild animals. The region is known from ancient Egyptian records of trade expeditions to it. Some biblical scholars have identified it with the biblical land of Put.

At times Punt is referred to as Ta netjer, the "Land of the God".

It is not known, where this territory was, exactly. Most scholars today believe Punt was located to the southeast of Egypt, most likely in the coastal region of what is today Somalia, Djibouti, Eritrea, northeast Ethiopia and the Red Sea coast of Sudan. However, some scholars point instead to a range of ancient inscriptions which locate Punt in the Arabian Peninsula. It is also possible that the territory covered both the Horn of Africa and Southern Arabia. Puntland, the Somali administrative region situated at the extremity of the Horn of Africa, may be named in reference to the Land of Punt.

Inhabitants formed three groups which wore different clothing, and hairstyles. They held cattle and lived in stil houses. Starting from the Nile a caravan could reach Punt in five days. 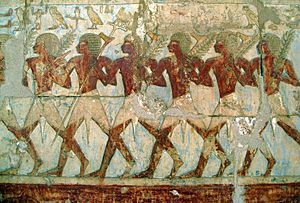 Egyptian soldiers from Hatshepsut's expedition to the Land of Punt as depicted from her temple at Deir el-Bahri. 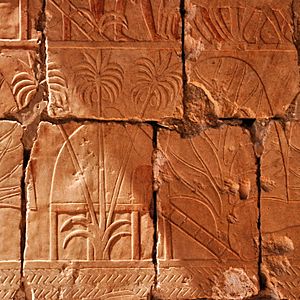 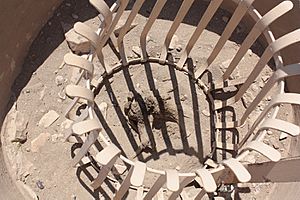 A tree in front of Hatshepsut's temple, claimed to have been brought from Punt by Hatshepsut's Expedition which is depicted on the Temple walls

The earliest recorded Egyptian expedition to Punt was organized by Pharaoh Sahure of the Fifth Dynasty (25th century BC). However, gold from Punt was in Egypt as early as the time of Pharaoh Khufu of the Fourth Dynasty.

There were more expeditions to Punt in the Sixth, Eleventh, Twelfth and Eighteenth dynasties of Egypt. In the Twelfth Dynasty, trade with Punt was celebrated in popular literature in the Tale of the Shipwrecked Sailor.

In the Eighteenth Dynasty of Egypt, Hatshepsut built a Red Sea fleet to make it easier to trade between the head of the Gulf of Aqaba and points south as far as Punt to bring mortuary goods to Karnak in exchange for Nubian gold. Hatshepsut personally made the most famous ancient Egyptian expedition that sailed to Punt. During the reign of Queen Hatshepsut in the 15th century BC, ships regularly crossed the Red Sea in order to obtain bitumen, copper, carved amulets, naptha and other goods transported overland and down the Dead Sea to Elat at the head of the gulf of Aqaba where they were joined with frankincense and myrrh coming north both by sea and overland along trade routes through the mountains running north along the east coast of the Red Sea.

A report of that five-ship voyage can still be seen on reliefs in Hatshepsut's mortuary temple at Deir el-Bahri. Throughout the temple texts, Hatshepsut "maintains the fiction that her envoy" Chancellor Nehsi, who is mentioned as the head of the expedition, had travelled to Punt "in order to extract tribute from the natives" who admit their allegiance to the Egyptian pharaoh. In reality, Nehsi's expedition was a simple trading mission to a land, Punt, which was by this time a well-established trading post. Moreover, Nehsi's visit to Punt was not inordinately brave since he was "accompanied by at least five shiploads of [Egyptian] marines" and greeted warmly by the chief of Punt and his immediate family. The Puntites "traded not only in their own produce of incense, ebony and short-horned cattle, but [also] in goods from other African states including gold, ivory and animal skins." According to the temple reliefs, the Land of Punt was ruled at that time by King Parahu and Queen Ati. This well illustrated expedition of Hatshepsut occurred in Year 9 of the female pharaoh's reign with the blessing of the god Amun:

Said by Amen, the Lord of the Thrones of the Two Land: 'Come, come in peace my daughter, the graceful, who art in my heart, King Maatkare [ie. Hatshepsut]...I will give thee Punt, the whole of it...I will lead your soldiers by land and by water, on mysterious shores, which join the harbours of incense...They will take incense as much as they like. They will load their ships to the satisfaction of their hearts with trees of green [ie. fresh] incense, and all the good things of the land.'

The Egyptians were not particularly good at travelling at sea. For them, the travel to Punt must have been similar to modern-day explorers travelling to the moon. But the reward [of obtaining frankincense, ebony and myrrh] clearly outweighed the risks. Hatshepsut's 18th dynasty successors, such as Thutmose III and Amenhotep III also continued the Egyptian tradition of trading with Punt. The trade with Punt continued into the start of the 20th dynasty before terminating before the end of Egypt's New Kingdom. Papyrus Harris I, a contemporary Egyptian document which detailed events that occurred in the reign of the early 20th dynasty king Ramesses III, includes an explicit description of an Egyptian expedition's return from Punt:

They arrived safely at the desert-country of Coptos: they moored in peace, carrying the goods they had brought. They [the goods] were loaded, in travelling overland, upon asses and upon men, being reloaded into vessels at the harbour of Coptos. They [the goods and the Puntites] were sent forward downstream, arriving in festivity, bringing tribute into the royal presence.

After the end of the New Kingdom period, Punt became "an unreal and fabulous land of myths and legends."

At times, the ancient Egyptians called Punt Ta netjer, meaning "God's Land". This referred to the fact that it was among the regions of the Sun God, that is, the regions located in the direction of the sunrise, to the East of Egypt. These eastern regions' resources included products used in temples, notably incense. Older literature (and current non-mainstream literature) maintained that the label "God's Land", when interpreted as "Holy Land" or "Land of the gods/ancestors", meant that the ancient Egyptians viewed the Land of Punt as their ancestral homeland. W. M. Flinders Petrie believed that the Dynastic Race came from or through Punt and E. A. Wallis Budge stated that "Egyptian tradition of the Dynastic Period held that the aboriginal home of the Egyptians was Punt...". The term was not only applied to Punt, located southeast of Egypt, but also to regions of Asia east and northeast of Egypt, such as Lebanon, which was the source of wood for temples.

Queen Ati, shown in the reliefs of Hatshepsut, demonstrate advanced Steatopygia, associated though not limited to Khoi-San people of East and South Africa. It has been suggested that this may be evidence of the survival of Khoi-San cultures since the Sangoan culture in North Eastern Africa prior to the arrival of Cushitic speaking cultures in the region. 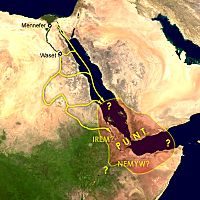 The products of Punt (as they are shown in Hatshepsut's temple) are easily found in the Horn of Africa. They are less common or absent in Arabia. For this reason, most scholars think that Punt was in Northeast Africa. These products included gold and aromatic resins such as myrrh, frankincense, and ebony; the wild animals depicted in Punt included giraffes, baboons, hippopotami, and leopards. According to Richard Pankhurst: "[Punt] has been identified with territory on both the Arabian and the Horn of Africa coasts. Consideration of the articles which the Egyptians obtained from Punt, notably gold and ivory, suggests, however, that these were primarily of African origin. ... This leads us to suppose that the term Punt probably applied more to African than Arabian territory."

Some scholars disagree with this view and point to a range of ancient inscriptions which locate Punt in Arabia. Dimitri Meeks has written that "Texts locating Punt beyond doubt to the south are in the minority, but they are the only ones cited in the current consensus about the location of the country. Punt, we are told by the Egyptians, is situated – in relation to the Nile Valley – both to the north, in contact with the countries of the Near East of the Mediterranean area, and also to the east or south-east, while its furthest borders are far away to the south. Only the Arabian Peninsula satisfies all these indications."

In 2010, a genetic study was conducted on the mummified remains of baboons that were brought back from Punt by the ancient Egyptians. Led by a research team from the Egyptian Museum and the University of California, the scientists used oxygen isotope analysis to examine hairs from two baboon mummies that had been preserved in the British Museum. One of the baboons had distorted isotopic data, so the other's oxygen isotope values were compared to those of modern-day baboon specimens from regions of interest. The researchers at first found that the mummies most closely matched modern specimens seen in Eritrea and Ethiopia as opposed to those in neighboring Somalia, with the Ethiopian specimens "basically due west from Eritrea". The team did not have the opportunity to compare the mummies with baboons in Yemen. The scientists believed that such an analysis would yield similar results since, according to them, regional isotopic maps suggest that baboons in Yemen would closely resemble those in Somalia. Professor Dominy, one of the lead researchers, concluded from this that "we think Punt is a sort of circumscribed region that includes eastern Ethiopia and all of Eritrea." In 2015, the scientists conducted a followup study to confirm their initial findings, and concluded that "our results reveal a high likelihood match with eastern Somalia and the Eritrea-Ethiopia corridor, suggesting that this region was the source of Papio hamadryas exported to Ancient Egypt."

All content from Kiddle encyclopedia articles (including the article images and facts) can be freely used under Attribution-ShareAlike license, unless stated otherwise. Cite this article:
Land of Punt Facts for Kids. Kiddle Encyclopedia.