Amun was one of the eight ancient Egyptian gods who formed the Ogdoad of Hermopolis. He was the god of the air and his consort was Ament (Amaunet). 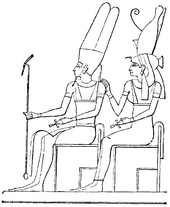 In Egyptian mythology, Amun was a very powerful god. He was often combined with Ra to form the god Amun-Ra. At one point in Egyptian history, he was called the "King of the Gods".

Amun (also spelled Amon, Amoun, Amen, and sometimes Imen, Egyptian Yamanu) was the name of a deity, in Egyptian mythology, who became one of the most important deities in Ancient Egypt. In later years, bined with Horus into one god.

He began as a Theban wind and fertility god and ended up the supreme deity, with most of Egypt's vast wealth dedicated to his temple. Around the second millennium B.C.E., Thebes and its cult of Amun grew so powerful that it threatened worship of the sun god, Ra. The two deities merged. Amun-Ra was hailed as a national god, the creator of the universe, the pharaoh's personal protector, and the god of war.

Amun's name is first recorded as imn. That means "The hidden (one)". Vowels were not written in Egyptian hieroglyphics, but Egyptologists think the name survives into the Coptic language as Amoun.

It was thought that he had created himself and then created everything else while remaining distant from the rest of the world. In that sense, he was the original inscrutable and indivisible creator.

Amun was shown in human form, seated on a throne, wearing on his head a plain deep circlet from which rise two straight parallel plumes, maybe meant as had no father

When Amun had become more important than Menthu, the local war god of Thebes, Menthu was called the son of Amun. However, as Mut was infertile, it was believed that she, and thus Amun, had adopted Menthu instead.

All content from Kiddle encyclopedia articles (including the article images and facts) can be freely used under Attribution-ShareAlike license, unless stated otherwise. Cite this article:
Amun Facts for Kids. Kiddle Encyclopedia.