A vowel is a particular kind of speech sound made by changing the shape of the upper vocal tract, or the area in the mouth above the tongue. In English it is important to know that there is a difference between a vowel sound and a [letter] in the [alphabet]. In English there are five vowel letters in the alphabet.

These letters are vowels in English:

The letter W can sometimes be the second part of a vowel sound as in words like such as cow, bow, or how. In these words the vowel has the sound of /aʊ/. The letter W can be used as a consonant sound at the beginning of in the words when, where, wet. In some languages, like Welsh, the letter W represents the vowel sound /ʊ/, like cwm (a kind of valley).

In written English the six vowel letters are used to represent the 13-15 vowel sounds (depending on the variety) in English. This means there are many more vowel sounds than letters in the English alphabet, and the English spelling systems doesn't always help us figure out what the English sounds are. This can be confusing.

Simple vowels are called monophthongs. The letters, like /ɪ/, are the IPA letters for each vowel sound in English. (The IPA is the International Phonetic Alphabet). In the IPA, each symbol represents a different sound, so using the IPA is helpful in pronouncing words. 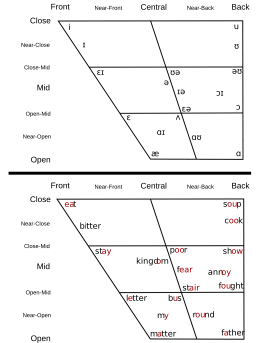 Common monophthongs in English (these are for General American English) include:

Diphthongs are a combination of two different vowel sounds, one vowel sounds turns into another sound as you say them. If you pronounce the words below slowly, you can hear the two vowel sounds of the diphthongs.

Common diphthongs in English include:

The difference between the way English is spelled and the way the words are pronounced came about because all languages change, so spoken English changes, but the spelling system does not.

The study of speech sounds is called phonetics.

All content from Kiddle encyclopedia articles (including the article images and facts) can be freely used under Attribution-ShareAlike license, unless stated otherwise. Cite this article:
Vowel Facts for Kids. Kiddle Encyclopedia.