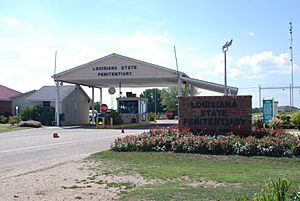 West Feliciana Parish (French: Paroisse de Feliciana Ouest; Spanish: Parroquia de West Feliciana) is a civil parish located in the U.S. state of Louisiana. At the 2010 census, the population was 15,625, and 15,310 at the 2020 census. The parish seat is St. Francisville. The parish was established in 1824.

The River Bend Nuclear Generating Station, operated by Entergy Nuclear, is located in West Feliciana Parish below St. Francisville. It produces approximately 10 percent of the total electric power demand in Louisiana. The Louisiana State Penitentiary is also located in the parish, in Angola. It occupies 18,000 acres at a site in a river bend, surrounded on three sides by water. 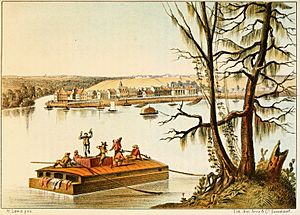 Bayou Sara seen from the Mississippi, late 1840s; St. Francisville on the rise in the background.

Following the founding of the Bayou Sara settlement by Franciscan/Capuchin monks in the late 17th century, the area was explored further by Spain, France, and Great Britain. The original settlement has been covered over by waters of the Mississippi River, which shifted course.

After 1763, when France was defeated by Britain in the Seven Years' War, it ceded this part of La Louisiane to Great Britain, which included it in its West Florida province. Spain gained control of the area in about 1780 – during the American Revolutionary War – and maintained its authority in the area for the next three decades.

In 1810, the colonists, many of whom were of British descent, rebelled against the colonial regime and established the short-lived independent Republic of West Florida. Within a few months, the United States declared the area to be part of the territory included in the Louisiana Purchase of 1803. (Today this region is called the Florida Parishes).

During the American Civil War, West Feliciana Parish provided financial assistance to the families of soldiers fighting for the Confederate States of America. Wives and children of soldiers were to receive from $10 to $40 per month, depending on family size.

Since before the Civil War, West Feliciana had been historically Democratic in voter preference. But after passage of Federal civil rights legislation in the mid-1960s, many white conservatives in the South began to shift to the Republican Party, at least in terms of supporting Presidential candidates. In 1972, the year of Richard Nixon's re-election as President, West Feliciana was the only Louisiana parish to support the George McGovern and Sargent Shriver ticket. During the same period, most African Americans in the South began to support the national Democratic Party, which had helped their drive for civil rights.

Since 2000, white voters in the parish have supported the Republican Party candidates in Presidential elections. That year Bush-Cheney polled 2,512 votes (55 percent), compared to 2,187 (45 percent) for Democrats Al Gore and Joe Lieberman. West Feliciana voters helped to re-elect George W. Bush and Dick Cheney in 2004, with 2,932 (56 percent) to 2,214 (42 percent) over Democratic candidates John Kerry and John Edwards. Republicans John McCain and Sarah Palin won the parish in 2008, but they lost the Presidential/Vice-Presidential contest to Democrats Barack Obama and Joe Biden.

The area—including references to the loess soil and Louisiana State Penitentiary—was used by Walker Percy as the setting for his last novel, The Thanatos Syndrome.

In January 2007, the state of Louisiana estimated that 15,318 people lived in the parish, with 5,000 of them being prisoners at Louisiana State Penitentiary (Angola). 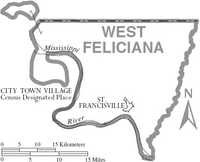 The West Feliciana Parish Library is located in St. Francisville. The library, previously a part of the Audubon Regional Library System, became independent in January 2004.

All content from Kiddle encyclopedia articles (including the article images and facts) can be freely used under Attribution-ShareAlike license, unless stated otherwise. Cite this article:
West Feliciana Parish, Louisiana Facts for Kids. Kiddle Encyclopedia.