Concordia Parish (French: Paroisse de Concordia) borders the Mississippi River in eastern central Louisiana. As of the 2010 census, the population was 20,822. The parish seat is Vidalia. The parish was formed in 1807.

Concordia Parish is part of the Natchez, MS–LA Micropolitan Statistical Area. It is historically considered part of the Natchez District, devoted to cotton cultivation as a commodity crop, in contrast to the sugar cane crop of southern Louisiana. Other Louisiana parishes of similar character are East and West Carroll, Madison and Tensas, all in this lowlying delta land. On the east side of the Mississippi River is the Natchez District around the city of Natchez, Mississippi.

Concordia was named for a Latin word meaning "harmony".

During the American Civil War, Concordia Parish was staunchly Confederate. According to the historian John D. Winters in his The Civil War in Louisiana (1963), Concordia, "a planter-dominated parish, displayed unusual Confederate patriotism in early March [1862]. A handsome bounty of $100 was offered to any man who joined one of three designated companies forming for the duration of the war. A bounty of $50 would be paid to those joining either of two companies being raised in the neighboring parish of Catahoula. A $50,000 bond issue was voted to finance the bounty program. . . . $40,000 was appropriated for the relief of needy families of volunteers in the parish."

The parish is completely agricultural bottomlands. The Ouachita River runs along the west boundary, the Red River along the south, and the Mississippi River along the east. All three rivers are contained by large levee systems. 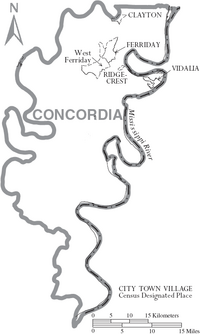 Concordia Parish School Board operates public schools in the parish.

All content from Kiddle encyclopedia articles (including the article images and facts) can be freely used under Attribution-ShareAlike license, unless stated otherwise. Cite this article:
Concordia Parish, Louisiana Facts for Kids. Kiddle Encyclopedia.