Catahoula Parish (French: Paroisse de Catahoula) is a parish in the U.S. state of Louisiana. As of the 2010 census, the population was 10,407. Its seat is Harrisonburg, on the Ouachita River. The parish was formed in 1808, shortly after the United States acquired this territory in the Louisiana Purchase of 1803.

Catahoula Parish was the home to many succeeding Native American groups in the thousands of years before European settlements began. Peoples of the Marksville culture, Troyville culture, Coles Creek culture and Plaquemine culture built villages and mound sites throughout the area. Notable examples include Peck Mounds, and the Troyville Earthworks. The Troyville Earthworks have components dating from 100 BCE to 700 CE during the Baytown to the Troyville-Coles Creek periods.

It once had the tallest mound in Louisiana at 82 feet (25 m) in height; it was the second-tallest mound in North America (after Monk's Mound at Cahokia Mounds). This mound was destroyed to make way for the Jonesville bridge over the Black River.

This area was settled primarily by migrants from the southern United States after the Louisiana Purchase, when the US acquired the vast, former French-claimed territory west of the Mississippi River. White migrants to north and central Louisiana were from the South, and were mainly of British descent and Protestant religions. They brought a new influence into Louisiana. Some also brought or purchased African-American slaves to work on larger plantations. Many of these were from the Upper South, which sold slaves through the domestic market. They brought their own cultural influences as well.

The parish was founded in 1808 and originally incorporated a very large area. As population increased in the region, new parishes were organized from the territory first included in Catahoula Parish. The parish was divided by the state in 1910, after La Salle Parish was formed from its old western section. As one of the new parishes organized during early United States settlement of this part of the state, it has had the third most boundary changes since that time. Only Natchitoches and Ouachita parishes have had more revisions of boundaries.

At the start of the American Civil War, James G. Taliaferro, a delegate to the Louisiana state secessionist convention from Catahoula Parish, argued strongly against leaving the American Union. Taliaferro "denied the constitutional right [of a state] to leave the Union and painted a gloomy picture of economic chaos, blighted prosperity, staggering taxation and 'fatal prostration of Louisiana's interests under a southern Confederation,' and he could see no way ahead to prevent final anarchy and war. So 'radical' were the ideas of Taliaferro that the convention refused to print his protest in the pages of [its journal]."

Catahoula Parish lays claim to its namesake Catahoula Leopard dog breed. The Catahoula breed was owned by Colonel James "Jim" Bowie of the Alamo and his brother Rezin Bowie, both of Louisiana. During the early 1900s, Theodore Roosevelt used the Catahoula when hunting. Louisiana Governor Earl Kemp Long also collected these dogs. 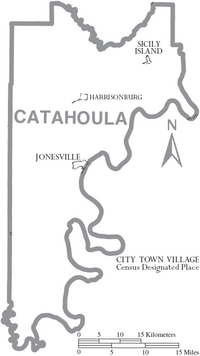 All content from Kiddle encyclopedia articles (including the article images and facts) can be freely used under Attribution-ShareAlike license, unless stated otherwise. Cite this article:
Catahoula Parish, Louisiana Facts for Kids. Kiddle Encyclopedia.