Kids Encyclopedia Facts
This page is about the river in Arkansas and Louisiana. For the river in Texas and Oklahoma, see Washita River. 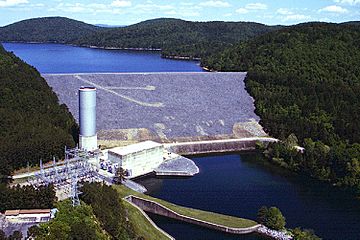 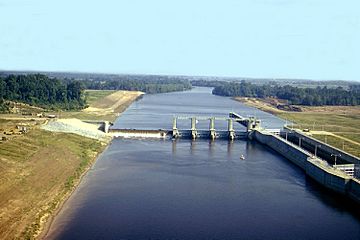 Columbia Lock and Dam on the Ouachita River

The Ouachita River ( WAH-shi-tah) is a 605-mile-long (974 km) river that runs south and east through the U.S. states of Arkansas and Louisiana, joining the Tensas River to form the Black River near Jonesville, Louisiana. It is the 25th-longest river in the United States (by main stem).

Just below Lake Catherine, the river bends south near Malvern, and collects the Caddo River near Arkadelphia. Downstream, the Little Missouri River joins the Ouachita. After passing the city of Camden, shortly downstream from where dredging for navigational purposes begins, the river collects the waters of Smackover Creek and later the Ouachita's main tributary, the Saline River. South of the Saline, the Ouachita flows into Lake Jack Lee, a reservoir created by the Ouachita and Black River Project, just north of the Louisiana state line. The Felsenthal National Wildlife Refuge encompasses the Ouachita from the Saline River to Lake Jack Lee's mouth.

The Ouachita has five locks and dams along its length, located at Camden, Calion, and Felsenthal, Arkansas, and in Columbia and Jonesville, Louisiana.

The river is named for the Ouachita tribe, one of several historic tribes who lived along it. Others included the Caddo, Osage Nation, Tensa, Chickasaw, and Choctaw. The historian Muriel Hazel Wright suggested that word Ouachita owa chito is a Choctaw phrase meaning "hunt big" or "good hunting grounds".

Before the rise of the historic tribes, their indigenous ancestors lived along the river for thousands of years. In the Lower Mississippi Valley, they began building monumental earthwork mounds in the Middle Archaic period (6000–2000 BC in Louisiana). The earliest construction was Watson Brake, an 11-mound complex built about 3500 BC by hunter gatherers in present-day Louisiana. The discovery and dating of several such early sites in northern Louisiana has changed the traditional model, which associated mound building with sedentary, agricultural societies, but these cultures did not develop for thousands of years.

The largest such prehistoric mound was destroyed in the 20th century during construction of a bridge at Jonesville, Louisiana. Likely built by the Mississippian culture, which rose about 1000 AD on the Mississippi and its tributaries, this mound was reported in use as late as 1540 by the Spanish explorer Hernando de Soto. On his expedition through this area, he encountered Indians occupying the site. A lightning strike destroyed the temple on the mound that year, which was seen as a bad omen by the tribe. They never rebuilt the temple, and were recorded as abandoning the site in 1736.

During the late 1700s, when the area was controlled by the Spanish and French, the river served as a route for early colonists, and for land speculators such as the self-styled Baron de Bastrop. The "Bastrop lands" later passed into the hands of another speculator, former Vice President Aaron Burr. He saw potential for big profits in the event of a war with Spain following the Louisiana Purchase. Burr and many of his associates were arrested for treason, before their band of armed settlers reached the Ouachita.

During the 1830s, the Ouachita River Valley attracted land speculators from New York and southeastern cities. Its rich soil and accessibility due to the country's elaborate river steamboat network made it desirable. Developers cultivated land for large cotton plantations; dependent on slave labor, cotton production supported new planter wealth in the ante-bellum years. Steamboats ran scheduled trips between Camden, Arkansas and New Orleans, for example. A person could travel from any eastern city to the Ouachita River without touching land, except to transfer from one steamboat to another.

One of the investors from the east was Meriwether Lewis Randolph, the youngest grandson of Thomas Jefferson. He was building a home on the Ouachita River in what is now Clark County, Arkansas, when he died of malaria in 1837. He had been appointed Secretary of the Arkansas Territory by President Andrew Jackson in 1835, and had relinquished his commission when Arkansas became a state in 1836.

Skirmishes took place near the Ouachita River during the American Civil War. On September 1, 1863, forces of the Seventeenth Wisconsin led by Brig. Gen. M. M. Crocker crossed from Natchez, Mississippi to Vidalia, the seat of Concordia Parish, and moved toward the lower Ouachita in the section called the Black River. That night the Confederate steamer Rinaldo was captured by Union forces after a short artillery duel and was destroyed. Crocker fought with the few troops stationed on the Black River and moved toward Harrisonburg, seat of Catahoula Parish.

A 337-mile-long "Ouachita-Black Rivers Navigation Project" began in 1902, to create a navigable waterway from Camden, Arkansas to Jonesville, Louisiana, and when completed in 1924 included six locks and dams that were 84 feet wide and 600 feet in length, having from 3 to 5 tainter gates. Including the Black River the total navigable length is 351 miles. The Ouachita-Black Rivers Navigation Project has less than a million tons of shipping annually which has the likely prospect of the future withdrawal of federal support. The project's system of dams and locks enhances the river's recreational use and regional water supply. 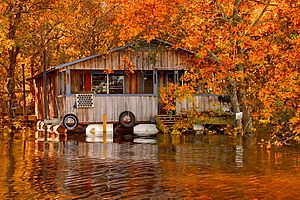 A floating camp on the Ouachita River in Louisiana

The river continues to be utilized for commercial navigation on a smaller scale than during its "steamboat" days. It is fed by numerous small creeks containing endemic native fish such as killifish. Fishing remains popular in the river for black bass, white bass, bream, freshwater drum, and gar. Concerns about airborne mercury contamination in some areas discourage consumption of the fish for food. Fishing for rainbow trout is popular in the tailwaters of Lakes Ouachita, Hamilton and Catherine in and around Hot Springs, Arkansas.

The river is commercially navigable from Camden, Arkansas, to its terminal point in Jonesville in Catahoula Parish in eastern Louisiana. Upstream of Camden, the river receives substantial recreational use.

The Ouachita is lined for most of its length with deep woods, including substantial wetlands. It has a scenic quality representative of the southwestern Arkansas and northern Louisiana region.

Major towns along the river are:

All content from Kiddle encyclopedia articles (including the article images and facts) can be freely used under Attribution-ShareAlike license, unless stated otherwise. Cite this article:
Ouachita River Facts for Kids. Kiddle Encyclopedia.