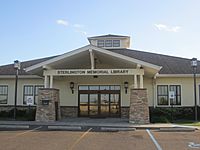 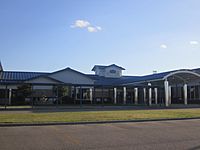 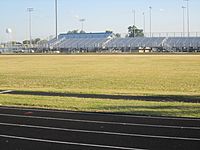 Sterlington Panthers (formed 1960) play on this field on Friday evenings in the fall. 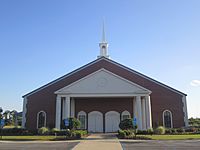 Sterlington is a town in northern Ouachita Parish, Louisiana, United States, near the boundary with Union Parish. At the 2010 census, the population was 1,594. In the 2018 census estimates, the population rose to 2,724. The current figure tabulation shows Sterlington the fastest-growing community in Northeast Louisiana.

Mayor Vern Breland said the latest census report "confirms what we know in Sterlington: We're poised for massive amounts of growth." Sterlington, which was incorporated in 1961, is expected to reach a population of 5,000 by 2017 because of its public schools and easy access to major employers in Ouachita Parish.

Since 1930, Sterlington has been home to ANGUS Chemical Company (ANGUS), a wholly owned subsidiary of the Dow Chemical Company, provides approximately 204 full-time and contract jobs to the area. ANGUS has a $20 million annual impact on the local economy, as well as "Contributes more than $50,000 annually to the United Way and other community outreach programs."

In 2013, Mayor Vern A. Breland, first elected in 2006, was named president of the Louisiana Municipal Association at its annual meeting in Monroe. Founded in 1926, the association is the lobbying group for 303 member municipalities in the state ranging from small villages to the largest cities. Mayor Breland resigned on October 1, 2018. Kerry Elee was named interim mayor by the Board of Aldermen, until the November 6, 2018 election., Former Mayor Vern Breland was subsequently arrested for malfeasance in office on April 12, 2020.

The actor Ed Nelson of the Peyton Place television series relocated with his family to Sterlington from New Orleans in 2005 in the aftermath of Hurricane Katrina. He subsequently moved to Greensboro, North Carolina, where he was living at the time of his death in 2014 of congestive heart failure.

U.S. Ambassador Edward J. Perkins was born in Sterlington in 1928.

All content from Kiddle encyclopedia articles (including the article images and facts) can be freely used under Attribution-ShareAlike license, unless stated otherwise. Cite this article:
Sterlington, Louisiana Facts for Kids. Kiddle Encyclopedia.