Kids Encyclopedia Facts
Not to be confused with Garland, Arkansas.

Garland County is a county located in the U.S. state of Arkansas. As of the 2010 census, the population was 96,024. The county seat is Hot Springs.

Garland County comprises the Hot Springs, AR Metropolitan Statistical Area. The county includes Hot Springs National Park, the first property to be protected under federal legislation; a law was passed in 1832 supported by President Andrew Jackson to preserve this area, even before Arkansas was admitted as a state.

This area was occupied by the historic Natchitoches people, who frequented the hot springs for their healing powers. Their ancestors among regional indigenous peoples had been coming to this area for thousands of years.

President Thomas Jefferson requested William Dunbar, a planter and amateur scientist of Natchez, to explore this area. Dunbar led small group of a dozen soldiers and friend George Hunter, a chemist, to the Ouachita Mountains to report on the Indian tribes, minerals, and springs. They reached Hot Springs in December 1804, where they found a basic cabin used by visitors to the springs.

The first European-American settler was Jean Pierre Emanuel Prudhomme, a descendant of French colonists. An owner of a plantation at Red River, Prudhomme was suffering from illness and sought relief from the springs. In 1807 He built the first permanent European house by the springs, living here for two years. Isaac Cates and John Percival, two trappers from Alabama, joined him. Percival foresaw a great potential for the area and built log cabins in order to rent to visitors to the springs.

In 1828, Ludovicus Belding came with wife and children to visit the hot springs. After a few months they built a small hotel for the visitors of the springs.

In 1832 President Andrew Jackson signed legislation to protect the hot springs area for recreational use by American citizens as Hot Springs Reservation, the first time such action was taken. This was four years before Arkansas became a state, on June 15, 1836. A dispute among original settlers and their descendants over control of the property was settled by the US Supreme Court in 1877 in favor of the federal government. Hot Springs National Park was established in 1921 and is managed by the National Park Service. Garland County is Arkansas' 68th county, formed on April 5, 1873, from portions of Hot Spring, Montgomery, and Saline Counties. It was named for Augustus H. Garland, eleventh governor of Arkansas. 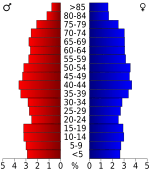 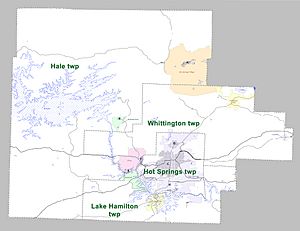 Townships in Garland County, Arkansas as of 2010

Townships in Arkansas are the divisions of a county. Each township includes unincorporated areas; some may have incorporated cities or towns within part of their boundaries. Arkansas townships have limited purposes in modern times. However, the United States Census does list Arkansas population based on townships (sometimes referred to as "county subdivisions" or "minor civil divisions"). Townships are also of value for historical purposes in terms of genealogical research. Each town or city is within one or more townships in an Arkansas county based on census maps and publications. The townships of Garland County are listed below; listed in parentheses are the cities, towns, and/or census-designated places that are fully or partially inside the township.

All content from Kiddle encyclopedia articles (including the article images and facts) can be freely used under Attribution-ShareAlike license, unless stated otherwise. Cite this article:
Garland County, Arkansas Facts for Kids. Kiddle Encyclopedia.