Montgomery County is a county located in the U.S. state of Arkansas. As of the 2010 census, the population was 9,487. The county seat is Mount Ida. Montgomery County is Arkansas's 45th county, formed on December 9, 1842, and named after Richard Montgomery, an American Revolutionary War general.

Stone spear and dart points found in the area verify that people from the Dalton Culture were present in Mongomery County around 8500 BC. Early signs of houses and American Indian cemeteries are present in and around Caddo Gap, Arkansas, indicating the definite presence of the Caddo Indians having settled in the area in the 13th century and 14th century. In 1541, the explorer Hernando de Soto fought the Tula Indians at Caddo Gap, and that he was injured during that battle.

The first white settlers arrived in 1812, when Martin and Mary Collier settled what is now Caddo Gap. They befriended the local tribes, and seemingly had no problems from them whatsoever. Granville Whittington arrived in 1835, and built a road that led from Hot Springs, Arkansas to his farm about a mile north of the settlement of Montgomery. By 1836 when Arkansas received statehood, most of the native Indians were gone. Some of the native Indian women had intermingled and intermarried with local white settlers. Whittington opened a general store that drew customers from the surrounding area, and in 1842 he opened the Mount Ida Post Office in Mount Ida. West of the Ouachita River, settlers from a wagon train wintered in what is now Oden, and decided to stay when the weather cleared. Montgomery County was named after General Richard Montgomery, an American general who died during the American Revolution.

Originally part of the Louisiana Purchase, it was first claimed by Spain, then France, and in 1813 was part of Arkansas County, then in 1818 was part of Clark County. On December 9, 1842, Montgomery County became its own county, with Montgomery as its county seat. In 1850 Salem became the county seat, but later that same year the county seat changed again, to Mount Ida, where Whittington's Post Office was located. Mount Ida incorporated in 1854.

When the Civil War broke out, most of Montgomery County favored the Confederacy. Mount Ida settlers John Lavender and John Simpson formed one company to serve in the Confederate Army, and the 4th Arkansas Infantry originated in Mount Ida also, but after the war few from the company organized by Lavender and Simpson returned to Montgomery County. With mostly women left to tend to the farms, soldiers from both the Confederate and the Union Army raided homes and farms for supplies, leaving settlers with little to eat. After the war, soldiers from both armies settled in the area, building schools and homes. In 1884 Oden built a steam saw, a cotton gin and a gristmill.

Up to modern times

With the arrival of the Missouri Pacific Railroad in Caddo Gap around the turn of the 20th century, Caddo Gap and Black Springs began to thrive. In 1910 the county population reached its peak, with sawmills springing up in several locations. That same year, the town of Womble was settled. It changed its name to Norman in 1925. In 1918 the logging camp of Mauldin, Arkansas sprang up, and a railroad line was built to it from Norman. However, almost overnight in 1936, Mauldin closed up, dismantled everything, and moved on having depleted the virgin timber in the area. This, combined with the Great Depression, had a devastating effect on the county.

Many people moved away to find work elsewhere, while others found employment with the Civilian Conservation Corps. During World War II, people continued to leave Montgomery County, with the men going off to war, and others leaving to find employment in war plants. Mining became one source of local employment for a time, but did not last. Most mines were due to a large abundance of quartz in the county. In 1922 there were eighty three school districts in Montgomery County. Today there are three, Caddo Hills, Mount Ida, and Ouachita River. Cattle, swine, and poultry are now the main areas of employment in the region. 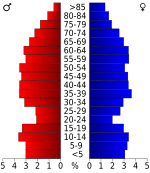 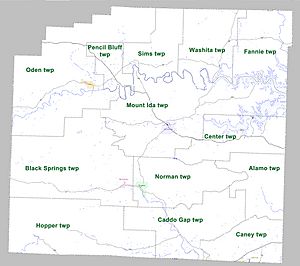 Townships in Montgomery County, Arkansas as of 2010

Townships in Arkansas are the divisions of a county. Each township includes unincorporated areas; some may have incorporated cities or towns within part of their boundaries. Arkansas townships have limited purposes in modern times. However, the United States Census does list Arkansas population based on townships (sometimes referred to as "county subdivisions" or "minor civil divisions"). Townships are also of value for historical purposes in terms of genealogical research. Each town or city is within one or more townships in an Arkansas county based on census maps and publications. The townships of Montgomery County are listed below; listed in parentheses are the cities, towns, and/or census-designated places that are fully or partially inside the township.

All content from Kiddle encyclopedia articles (including the article images and facts) can be freely used under Attribution-ShareAlike license, unless stated otherwise. Cite this article:
Montgomery County, Arkansas Facts for Kids. Kiddle Encyclopedia.