Pike County is a county located in the U.S. state of Arkansas. As of the 2010 census, the population was 11,291. The county seat is Murfreesboro. Pike County is Arkansas's 25th county, formed on November 1, 1833, and named for Lieutenant Zebulon Pike, the explorer who discovered Pikes Peak. It is an alcohol prohibition or dry county.

The first known residents of the area now considered Pike County were Native Americans. The Quapaw tribe was prominent in the area, as well as the Kadohadacho, and Cahinnio tribes. Expeditions led by Hernando de Soto and Sieur de La Salle passed through the area. Around 1800, the Kadohadocho tribe migrated to Texas to avoid further repeated attacks by the Osage, who would venture in from the Oklahoma area.

Pike County was part of the Louisiana Purchase of 1803, and on November 1, 1833, Pike County was created, out of Clark and Hempstead counties by the Arkansas territorial legislature and named after Zebulon Pike. A post office was established in what is now Murfreesboro, with the town itself receiving its name due to some of its first residents having originated from Murfreesboro, Tennessee. Until it was officially named, Murfreesboro had been referred to as "Forks of the Missouri" or "Three Forks". Much of the county's documented history was destroyed in the court house fires of 1855 and 1895.

During the Civil War, Pike County men formed two full companies for service in regiments formed in Montgomery County, in the Confederate Army, with the most active being the 4th Arkansas Infantry, and the county was firmly in support of the Confederate States of America. In 1864 Murfreesboro served as a winter quarters for the Confederate regiments assigned to that area, with Union Army regiments wintering just eighteen miles away in and around Antoine.

In 1900, Martin White Greeson, who owned property in Pike County and also owned and operated the Murfreesboro-Nashville Southwest Rail-Road, began campaigning for a dam on the Little Missouri River to alleviate flooding. It was not until 1941 that the project was approved, and construction began on June 1, 1948, and was completed on July 12, 1951. The lake created by the dam was named Lake Greeson in Greeson's honor.

In the early 20th century, Rosboro, Arkansas was the headquarters of one of the states most productive lumber mills, and received its name from Thomas Whitaker Rosborough, owner of the lumber company. That company, originating in Rosboro, eventually moved to Springfield, Oregon, where today it is one of the largest forest product producers in the U.S., and it operates under the name of the "Rosboro Timber Company".

During World War II Murfreesboro was used as a site to house and work German prisoners of war. Since the late 19th century, the county's main source of employment has been in the timber industry. 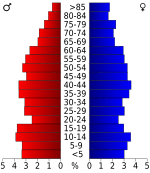 Townships in Arkansas are the divisions of a county. Each township includes unincorporated areas; some may have incorporated cities or towns within part of their boundaries. Arkansas townships have limited purposes in modern times. However, the United States Census does list Arkansas population based on townships (sometimes referred to as "county subdivisions" or "minor civil divisions"). Townships are also of value for historical purposes in terms of genealogical research. Each town or city is within one or more townships in an Arkansas county based on census maps and publications. The townships of Pike County are listed below; listed in parentheses are the cities, towns, and/or census-designated places that are fully or partially inside the township.

All content from Kiddle encyclopedia articles (including the article images and facts) can be freely used under Attribution-ShareAlike license, unless stated otherwise. Cite this article:
Pike County, Arkansas Facts for Kids. Kiddle Encyclopedia.